The Feast of the Presentation is the signal for us here at Moreau Seminary to revert back to the Salve Regina as the Marian antiphon at the end of night prayer, which does mean that I no longer have to assault the ears of my brothers with my horrendous attempts to intone the Alma Redemptoris Mater. The Presentation also marks forty days since Christmas, and thus the time to say goodbye to the Infant Jesus until our next liturgical year. Apart from an incident involving the young boy left behind in the Big City, we will be encountering Jesus in the Gospel readings as a thirty-something year old man. However, before we do bid adieu to the Christ Child I have a final reflection on God's choice to be incarnate as a mere baby, and one insight it gave me on my own vocation story. 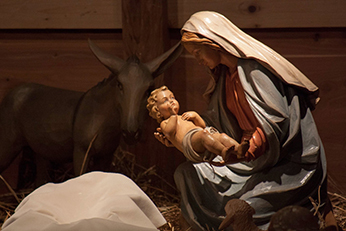 It was wonderful to see the young families at the Christmas liturgies here at Notre Dame, because the tiny infants with their gurgling, spluttering and crying, remind me that the Word of God was made flesh in just the same fashion. It is oft said that God speaks in the silence, and yet true as that may be, the miracle of Christmas is that we recognize that Jesus humbled himself to become a dependent human child, and that He too had to express His needs and reactions in inarticulate gurgling and burbling. The Word of God, spoken eternally by the Father, which entered into the silence of nothing to create the universe, now entering into the incoherent babble of humanity to redeem that universe.

Part of my vocation story was realizing that God continues to speak using the obscuring mediums of this universe, and while His call is clear and unchanging, it can become somewhat garbled in the transmission, and we become easily confused. Yet, such is His Providence that even our confusion can become the means for conveying His call. I received my undergraduate degree in mechanical engineering; not a field that would commonly spring to mind when one considers what seminarians might usually study as undergraduates. I hadn't a notion about Philosophy; the only difference I could tell between Plato and Nietzsche was that one had a German sounding name. At the end of my undergraduate I had not yet encountered Holy Cross. The call to priesthood that I had first felt as an 11/12 yr. old had sunk into the recesses of my consciousness during my school and university years. At the end of my undergraduate years I was quite perplexed because I wasn't feeling content with progressing to an engineering firm. It was identifying my sense of incompleteness as I faced the next 'logical' step in my life that was the necessary trigger for me to pause, reassess and look around to see if I was missing another path that I was supposed to take. 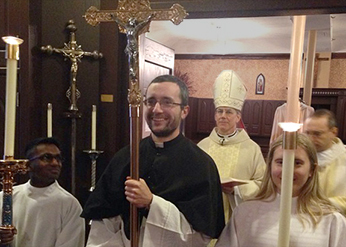 Hearing the archetypal vocation call of the Prophet Samuel in the Mass readings recently, I was reminded of this element of my vocation. God is calling persistently to Samuel, but he, hearing a voice, reasonably assumes that it is Eli who is calling him. After all, he understands that his ministry to the Lord in the Temple, is under the direction of Eli, and in obedience to him. Before he can open himself to respond to God's call, he must first realize where the call isn't coming from. We can be so rationally certain about what is possible and reasonable, and then be at a complete loss when our certainty leads us to bewilderment when the reasonable and possible don't work out. If God writes straight with crooked lines, let us also consider that perhaps He also speaks clearly with befuddling babble.

Mr. Cathal Kelleher, C.S.C., is in his first year of temporary vows with the Congregation of Holy Cross. He is currently studying in the M.Div program at the University of Notre Dame. Cathal is originally from Kilkenny, Ireland.