If it weren't for the Congregation of Holy Cross, Fathers Brian Ching, C.S.C., and Jarrod Waugh, C.S.C., may have never met. Even though they both moved far away from home to attend Notre DameBrian from Flushing, New York, and Jarrod from Edna, Kansasthey weren't in the same class year (2007 vs. 2008), they didn't live in the same dorm (Morrissey Manor vs. Keough Hall), and weren't involved in many of the same activities (Brian was a band manager and Jarrod in the Knights of Columbus). But after spending a few semesters living in the dorms at Notre Dame, each of them decided to pursue a vocation to the priesthood and religious life by entering Old College, the Undergraduate Seminary Program for the U.S. Province of Priests and Brothers of Holy Cross. 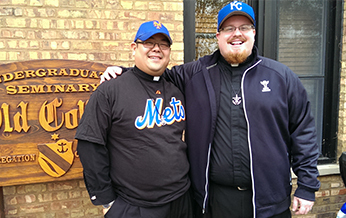 Brian entered seminary a year ahead of Jarrod, but they were in formation together for over six years, and were ordained together (with Fr. Mark DeMott, C.S.C.) in the Basilica of the Sacred Heart in April of 2013. In that time they became good friends and have worked to help build up the larger brotherhood of the Holy Cross communities in which they have lived. Each was assigned to a different parish in South Bend after taking Final Vows in 2012, Fr. Brian to St. Joseph Parish and Fr. Jarrod to Christ the King. But soon after, they were both called back to Notre Dame's campus to serve internal ministries for the Congregation, as Fr. Jarrod began work as a Vocations Director in 2013 and Fr. Brian became Director of Old College in 2015. 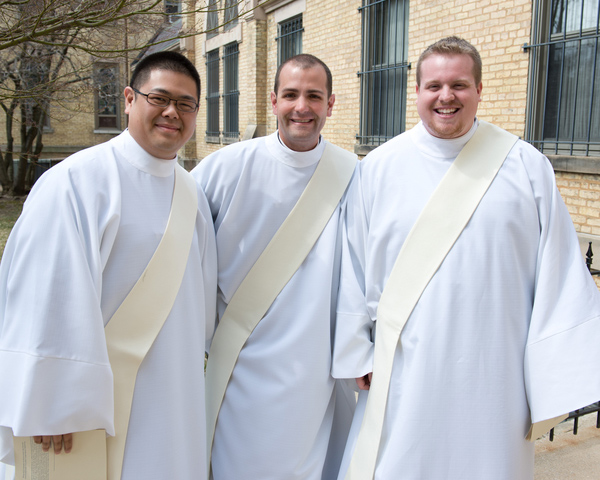 "It's fun being in the same local community again," Fr. Jarrod said, "there are several guys who I was in seminary with at different times who are back at Notre Dame in different capacities now, along with some of our older brothers who we have looked up to or who even formed us. It is an honor to be 'part of the team' now." Fr. Brian is now director of the formation program of which he had been a member. "It's certainly humbling to lead the program that was such an integral part of my own discernment. It is also great to have so many brothers from my time in the seminary now so close by."

In October of 1985, Bret Saberhagen (and Don Denkinger) helped the Kansas City Royals secure their World Series victory, and just a few weeks later Fr. Jarrod was born. Father Brian would have to wait until just after his first birthday to see Mookie Wilson (with the help of Bill Buckner) help secure the title for the Mets. Neither team has earned that honor since. But this year that will change for one of the fathers' favorite teams. Fr. Brian is probably the bigger baseball fan, growing up in the shadow of Shea Stadium (now Citi Field) and has been to more games than he can count. "Growing up I took it for granted that every kid must have a major league baseball team within ten minutes of their house," he said. "In the summers, my friends and I would often take the bus down and find cheap tickets." 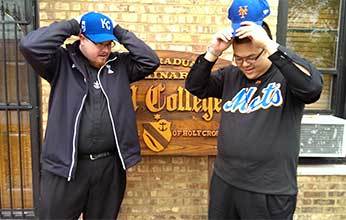 With Kansas City not winning another pennant until last year, Father Jarrod has grown up sympathizing with others' sorrows by being able to say, "I understand, I'm a Royals fan!" But no more. This year one of these two teams will again win it all, and in turn bring at least a season of ribbing of one priest by the other. They even have a gentlemanly wager on the series: If the Mets win, Fr. Jarrod has agreed to send Fr. Brian three bottles of Arthur Bryant's famous barbeque sauce and will track down a six-pack from Boulevard Brewing Co. But if the Royal can finish their momentum, Fr. Brian will present a cheesecake from Junior's Bakery to Fr. Jarrod, and will pick him up a six-pack from Brooklyn Brewery. At least they can both root for Notre Dame football on Saturday. May the best team win!