¡Viva Cristo Rey! (Long live Christ the King!) On November 23, 1927, Blessed Miguel Pro exclaimed these words before he was executed for the crime of being a Catholic priest. This martyr, like many of his Mexican brothers and sisters, risked his life to spread the Gospel of Jesus Christ. He was killed for his faith, but his witness inspired many people and converted hearts. Those who sought to persecute and remove the Catholic Church in Mexico couldn't match the faith of its people. We are all rooted to that same faith by our baptism into the family of Jesus Christ, who truly is our King.

Pope Pius XI instituted the Solemnity of Our Lord Jesus Christ, King of the Universe in 1925 in his encyclical Quas Primas, just two years before Blessed Miguel Pro was martyred for the faith. A powerful example for us all of the triumph of Christ's kingdom over any earthly one! Pope Pius XI was writing in a time of great unrest in a world precariously balanced between two world wars. He wrote: "If the kingdom of Christ, then, receives, as it should, all nations under its way, there seems no reason why we should despair of seeing that peace which the King of Peace came to bring on earth - he who came to reconcile all things, who came not to be ministered unto but to minister, who, though Lord of all, gave himself to us as a model of humility, and with his principal law united the precept of charity;" (Quas Primas, #20).

We turn to Jesus as our king today because He is the only One who can lead us to His Father. It is His authority alone that should be recognized now, and will be recognized at the end of time. Christ is certainly our King, who reigns not by throwing His power around and trying to be mightier than us, but by showing how to serve, rather than be served. He is a King unlike any other king that has ever been or ever will be. He was enthroned upon the Cross, delivering his final message of love and forgiveness, bloodied, beaten, and gasping for every breath. This is our King? This broken man on the Cross, who can barely speak or even breathe? Yes, this, this is Christ our King who on Christmas morning was heralded by the angels, and visited by the shepherds. This is Christ our King, who didn't bypass His Cross, but willingly embraced it, and calls us to pick up our crosses and follow Him. ¡Viva Cristo Rey! 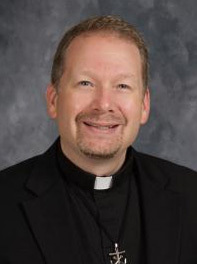 Fr. Neil Wack, C.S.C. is the pastor of Christ the King Catholic Church in South Bend, Ind. This is the parish Fr. Neil attended while growing up. He professed Final Vows in 2003 and was Ordained to the priesthood 2004.