Vows for a Lifetime

Vows for a Lifetime

It was especially meaningful to witness these six men, Matt, David, Tim, Chase, Dan, and Chris, vow to live their lives forever as religious in the Congregation of Holy Cross. 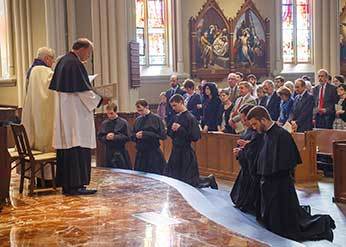 It was a joyful experience to watch them Saturday, but not dramatic. In fact, I would have been more shocked if one of them chose not to commit to Holy Cross. Their profession was a continuation, the next step to take in their relationship with God. Yes, it is a jump to commit forever to Holy Cross, but it is more of an actualization of what is already underneath. Their time in seminary and temporary vows (made each year for a year at a time) where they spent each day living as a Holy Cross religious, learning about the life, and developing themselves, brought them to a place in their lives where they could say, "This is where I want to spend the rest of my life." It was beautiful. 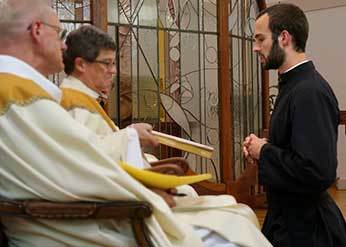 For myself, who recently professed temporary vows for the first time on August 2, 2014, forever is still a sobering thought and probably will be when, God willing, four years from now it will be my turn to kneel upon the seal of the Congregation in front of the altar in the Basilica of the Sacred Heart, look the Provincial in the eye, and echo generations of Holy Cross religious in saying, "Therefore I make to God forever the vows of chastity, poverty and obedience, according to the constitutions of the Congregation of Holy Cross" 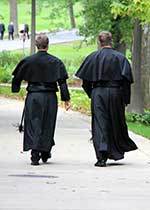 I think for all of us who take vows, the commitment never loses a sense of the unknown: Where will I be in twenty years? What will the Congregation ask of me? etc. The future will always remain a mystery. However, it comforts me to know that I will not be alone in walking the path. Others have walked it before me. And as these six men have encouraged and inspired me in my own life, I hope to do the same for those who follow in my tracks. Yes, they are vowed for life, and yes forever probably remains a sobering thought to each one of them, and will for awhile. But, they are ready to wake up each morning to voice in their daily lives the commitment they first made in the Basilica. "We pronounce our vows in a moment, but living them for the sake of the kingdom is the work of a lifetime. That fulfillment demands of us more than the mere wish, more even than the firm decision. It demands the conversion of our habits, our character, our attitudes, our desires." And this persistence in conversion toward the Lord is truly what brings us the excitement and encouragement we felt that morning.

Mr. Bryan Williams, C.S.C. is in first year of temporary vows at Moreau Seminary on the campus of Notre Dame. He and his fellow seminarians write a post each month for the Spes Unica Blog, sharing on their life and formation. Bryan is originally from Sugar Land, TX