With a Spirit of Fervor Sustain Me

With a Spirit of Fervor Sustain Me

At the beginning of each academic year, all the seminarians from Moreau Seminary and Old College Undergraduate Seminary gather for a week in LaPorte, Ind., in a tradition that stretches back to the early 20th century. At that time, seminarians studying theology in Washington, D.C., would leave the city for an extended summer break in the hills of western Maryland. 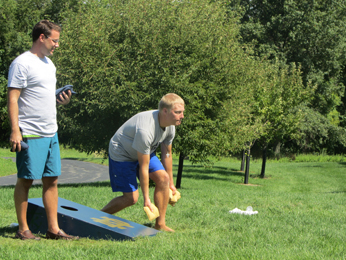 In time, this "camp" transformed into an orientation for new seminarians and a week of prayer, reflection on Holy Cross history and spirituality, and brotherly recreation for all the men in formation. In 2005 Holy Cross moved this seminarian camp from Maryland to Indiana, though it has retained the spirit – and many of the traditions – of those earlier camps.
Last week 42 seminarians gathered in LaPorte, including 13 men new to formation. The theme for the week was With a Spirit of Fervor Sustain Me: Formation for Apostolic Zeal in Holy Cross, recalling the prayer of Psalm 51. Faithful to the call of Blessed Basil Moreau, our founder, Holy Cross continues to serve the people of God with ardent apostolic zeal. During formation, we grow closer to Jesus Christ and discern his call in a more explicit way, and zeal for Christ's Church flows from this close relationship with the Lord. Yet it is not enough to develop zeal … it must also be sustained and fostered! 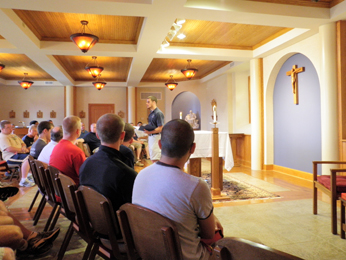 During our week at LaPorte, we heard from various Holy Cross religious about their lives in ministry and how they sustain "a spirit of fervor". A panel of younger religious – Fr. Michael Wurtz, C.S.C., Fr. Dan Parrish, C.S.C., and Fr. Neil Wack, C.S.C. – presented a theological explanation of zeal from Scripture and Tradition and used examples from their ministry in parishes and universities to show how Christ continues to set their hearts on fire with zeal. 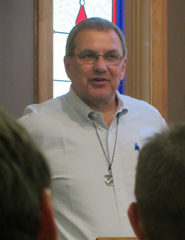 Br. Tom Dziekan, C.S.C., the Vicar General of Holy Cross, traveled from the Generalate in Rome to address our men on the zeal he has seen in Holy Cross around the world. From Africa and Bangladesh to South America and the United States, priests and brothers serve in schools, parishes, and missions with zeal for souls. Br. Tom also spoke on the vocation of Holy Cross brothers and how from the beginning of Holy Cross to today these men live with fervor and spiritual closeness to Jesus.
The three men about to profess perpetual vows and be ordained deacons, Mr. Brian Ching, C.S.C., Mr. Mark DeMott, C.S.C., and Mr. Jarrod Waugh, C.S.C. discussed their journey in formation and how Old College and Moreau Seminary deepened their prayer, increased their zeal in ministry, and developed their sense of brotherhood in Holy Cross.
Finally, Fr. Tom O'Hara, C.S.C., the newly elected Provincial Superior of the United States Province told the men a bit about his own vocation story and how the Holy Spirit led him to the priesthood and religious life. He also spoke with great fervor about the future of our Congregation – both in the United States and around the world. There are exciting times ahead with much good work to be done! 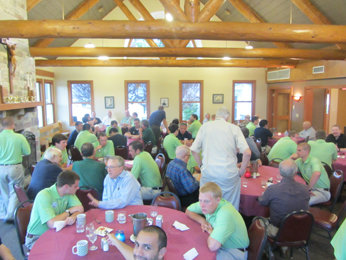 The week is not all presentations. In fact, what distinguishes "camp" from the various other retreats during the year is the extended time we have to have fun with each other and get to know everyone more informally – which is far easier to do in the swimming pool and playing bocce! Various tournaments spring up for bean bag tossing, bocce, fishing, and euchre, while others play volleyball and basketball or enjoy some downtime reading and chatting with their brothers. Each evening concludes with Night Prayer in the chapel and a social in "Ludger Lodge."
Central to the week is liturgy and the new men are introduced to Holy Cross' daily rhythm of Morning and Evening Prayer and daily Mass. Additionally, men are able to adore the Lord in the Blessed Sacrament during Exposition and participate in the Sacrament of Reconciliation.
The week at LaPorte is always a busy one – but one in which both the new men and returning seminarians are able to pray, play and learn together. They do this in the tradition of many generations in Holy Cross – vividly connected during our last night together when 50 Holy Cross priests and brothers joined the seminarians for dinner and prayer. Some of these were able to tell stories of their own time at camp, as far back as the early 1940's! Just as we seminarians hope to do, these men have served God and God's people with zeal and a spirit of fervor. 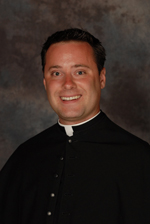 Mr. David Halm, C.S.C., is entering his second year of temporary vows as a seminarian at Moreau Seminary. This year, along with Mr. Tony Oleck from Old College, he served as one of the "Mayors" of the seminarian orientation at LaPorte. Learn more about seminary life and formation in the Congregation of Holy Cross.