On the Feast of Our Lady of Sorrows

Yellow caution tape stretches out along the sidewalk in front of the courthouse. People from nearby businesses step outside to watch the scene unfold, and others silently walk up holding a few signs. Hoping the day doesn’t turn to chaos, police take measures to secure the city block. Just days earlier, officers arrested a young man, and now they lead him in for a hearing. From the line of onlookers, a woman cries out through a mask covering her nose and mouth. Visibly distraught, tears welling up in her eyes, she says something about her son as a few people close by attempt to hold her back. Officers take little notice of her, but after the young man passes, a few news reporters rush over to identify her out of the crowd. “He did nothing wrong,” she pleads as police lights flash behind her.

For the record, I’m not describing any specific event. Yet such is the scene that fills my imagination as I read today’s Gospel against the backdrop of the current moment. Unfortunately, we’ve become used to scenes like this as we’re bombarded with emotionally charged images and videos of people reacting to conflict and unrest in their communities. The grieving parent. The fearful child. The troubled bystander. Loss and sorrow descend daily into our neighborhoods, homes, and schools, even now compounded by the ravages of nature and an unpredictable pandemic. We’re all too familiar witnessing people’s tearful embraces, cries of exhaustion, and bowed heads, all blown up in real time for the world to see. If there was ever a moment to turn to Our Lady of Sorrows, this would seem to be the time. 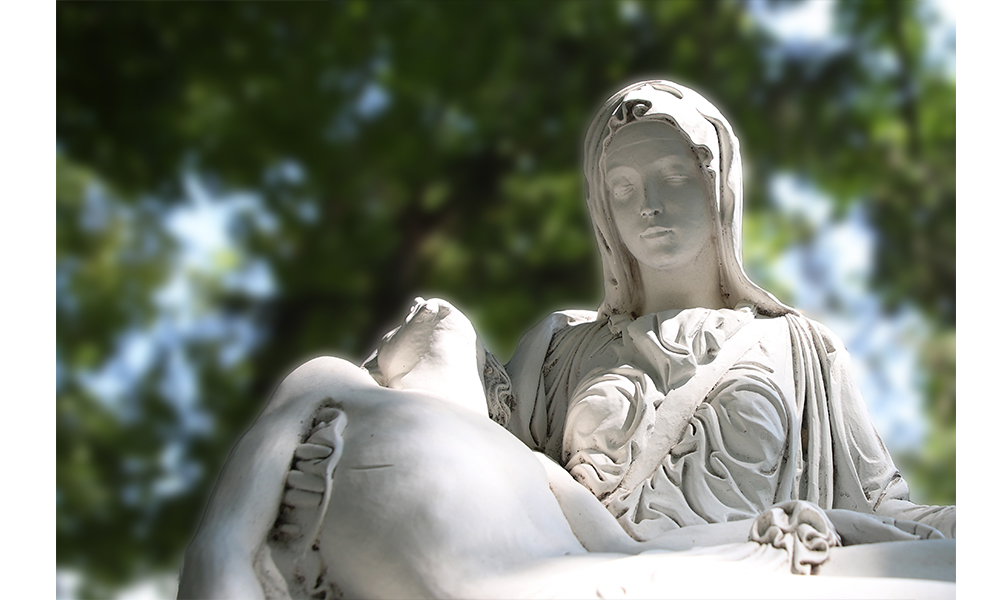 In our liturgy today, we proclaim that without herself dying, Mary won the martyr’s crown beneath the cross of the Lord. The soldier’s lance does not pierce Jesus’ side without also piercing a mother’s heart. Mary deeply knows human sorrow. And if we go back to our fictional story and take away the caution tape, the news crew, and the flickering lights, the grief there cannot be too far removed from Mary’s own experience on Mount Calvary from the Gospel. A mother positions herself as close as possible to her son as he is taken into custody and out of her reach. She calls out his name, buries her face in her hands, and perhaps feels like falling to her knees as others stand close by to comfort her. This is the posture of sorrow we know. This is the posture of sorrow we expect. So too on Mount Calvary we have a mother standing before her son. Arrested by the guards and sentenced to hang from a wooden beam, a curious crowd looks on. Surely she too must have cried out his name in agony. Surely she lowered her head so as not to bear the sight. Surely she clutched her chest gasping for breath. Surely she felt almost like collapsing beneath the weight of such misery.

But did she? The Gospel puts no words on Mary’s lips as her son slips away from life. The Gospel describes no gestures, no facial expressions, no movement from any part of her body. Our only textual detail—she stands by the cross. Mary stands by the cross. Does she speak? Does she shift her gaze? Is she thinking once more “How can this be” or “Do whatever he tells you”? Is a tortured soul such as hers meant to be so near the instrument of torture and just stand humbly by, wordlessly witnessing? Does Mary conform to the stereotypical posture of sorrow?

With the Gospel silent on the matter, we can only guess what the crucifixion scene must have been like from Mary’s point of view. The French artist James Tissot has taken one approach with a series of paintings capturing the moments of Good Friday. One image depicts a shrouded Mary with hands pressed against her heart with a longing gaze upward toward Jesus. His next image shows Mary with hands clasped together and raised high as if to plead for the life of her son. A third image displays Mary with arms thrown backward and falling against the beloved disciple. I’d say all three of these follow the posture of sorrow we know, the posture of sorrow we expect. Other artistic renditions of the Sorrowful Mother are not too far off. Yet Tissot’s final image veers from the norm. Entitled “It Is Finished,” here we only see Mary from behind, but she has regained her strength as she begins to stand up straight. Her arms are steady. She is resolute. She reaches to heaven with open palms. It appears more like a posture of praise, of adoration, of thanksgiving.

In the final moments of Christ’s suffering as he breathes his last, it’s as if the Sorrowful Mother once again sings the Magnificat. “My soul magnifies the Lord! The Mighty One has done great things! Holy is his name! He has shown strength with his arm and lifted up the lowly!” Indeed, Jesus also appears to be lifted up, glorified in Tissot’s last painting. Patriarchs and prophets appear in the heavens just beyond Mary’s line of sight, and they raise their hands as if to welcome a king. No longer a perch for death, the cross transforms itself into a throne from which the Savior reigns. Mary is the first witness, the first believer, the first to receive the king’s decree that death and sorrow will soon be no more. A new era of hope has begun.

Just as Christ transforms human suffering to make the cross a symbol of victory, Mary transforms our sorrow at the foot of the cross and shows us that our grief must never be divorced from hope. If we’re interpreting Tissot’s paintings appropriately, we discover that Mary never dismisses her sorrow—she experiences it fully. Yet for Mary, sorrow does not paralyze. It possesses no power to destroy her spirit, a spirit she places firmly in her Lord who keeps his promises forever. She does not run from pain that pierces her heart or turn against God out of anger over her son’s cruel fate. In the face of unspeakable anguish, she raises her arms to encounter Christ crucified and accept the suffering which comes with discipleship. With the psalmist, Mary can echo, “At night there are tears, but joy comes with dawn.” And so she shirks not the cross. We don’t know what her face revealed or if she spoke aloud, but the Gospel is clear—Mary stands by the cross. Can we with Mary also stand by the cross? Can we look beyond the branches of the awful tree to see the cross as a gift—indeed, the cross as our only hope? Yes, we turn to Mary as our patroness and intercessor in these uncertain days, the one who knew grief and was a Lady of Sorrows. Yet even more, we turn to her for the strength to sing God’s praises as Christ calls us to be beacons of hope for a world greatly in need.

Transcript of the Homily given in the Basilica of the Sacred Heart on the campus of the University of Notre Dame, On the Feast of Our Lady of Sorrows, September 15, 2020.

Featured Articles
A Moving Homily
For Our Lady of Sorrows – September 15, 2020