List of Those Credibly Accused of Sexual Abuse of a Minor

List of Those Credibly Accused of Sexual Abuse of a Minor

The list that follows is of those individuals of the United States Province of Priests and Brothers of the Congregation of Holy Cross for whom an accusation of the sexual abuse of a minor has been deemed credible.

This list was initially developed with the assistance of an outside law firm, which independently reviewed all personnel files of the Province. It has been vetted by the Province Review Board as well as by the Provincial Council. Changes to the list are possible given new information that may emerge. The list will be updated as necessary on our website.

You will note that the earliest incident for which an accusation has been made dates back to the 1940s. The most recent incident for which an accusation has been made was in the early 1990s. All who are on the list would have served in the Eastern Province, the Southern Province, or the Indiana Province of Holy Cross, which together now constitute the United States Province of Priests and Brothers. None of the individuals on the list is currently in ministry. While a list of assignments is included for each person, the incident(s) did not necessarily occur at one of the listed assignments.

The Congregation of Holy Cross, United States Province of Priests and Brothers, has a Policy on Response to Allegations of Sexual Abuse of Minors, which articulates our procedural actions, prevention and treatment measures, along with steps to assist victims. 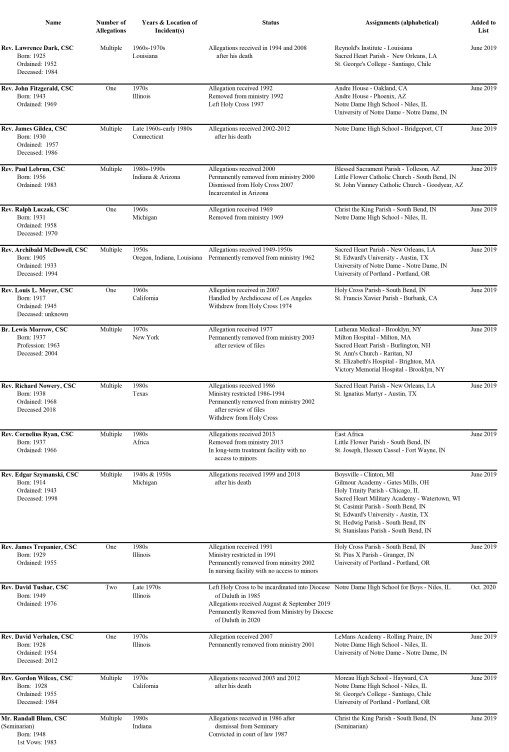