The Solemnity of St. Joseph, March 19 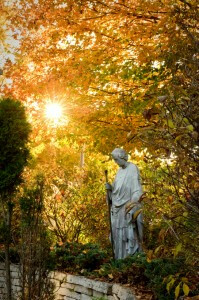 Blessed Basil Moreau, founder of the Congregation of Holy Cross, modeled his religious family of priests, brothers and sisters on the Holy Family. In doing so, he placed the brothers under the patronage of Saint Joseph.

St. Joseph does not speak one word in the Scriptures. Yet, we know that God chose him for a unique and lofty role. St. Joseph placed his trust in the plan that the Lord sought to unfold in his life and in the life of his betrothed wife, Mary. St. Joseph became the first to see the Christ Child and the first to hold Him. Except for Mary, he knew Jesus more intimately than anyone on earth. It stands to reason that when we go to St. Joseph, he will lead us into greater intimacy with his foster Son. “If Mary is the Queen of all the blessed,” wrote Moreau, “St. Joseph is undoubtedly first among the saints.”

In the Holy Family, Moreau saw an earthly representation of the Holy Trinity. The love among Jesus, Mary and Joseph gives us an earthly glimpse of the perfect love and unity of the Trinity. Therefore, Moreau notes, “St. Joseph represented the first person of the Blessed Trinity on earth.” St. Joseph’s intercession and example have much to offer us as a model of religious life.

St. Joseph was not afraid to take Mary as his wife, even though she was with child. He dutifully took his family to Egypt in response to the message of the angel. In his faith and by his actions, he becomes an example to the members of the Holy Cross family who follow Moreau in professing a profound trust in Divine Providence.

We also are inspired by this silent, hard worker, whose labors earned the food that fed the Body of Christ, even though He would be broken for the life of the world. In a similar manner, we labor not that we might receive adulation or reward, but that others may encounter Christ and come to know and love Him.

St. Joseph was one of Jesus’ first educators, tenderly caring for Jesus as a young child and leading Him as He developed in wisdom, age and favor before God and man. So too, we serve God as members of the Congregation and educators in the faith, looking to see in each student’s face the image of Christ and helping those students grow to become who God is calling them to be.

God entrusted St. Joseph with the task of clothing, feeding and protecting the Incarnate Word and His Blessed Mother. So too does God offer St. Joseph to us as the protector of the Universal Church. We pray that his intercession may help us to follow his selfless and tireless example of service to the Church.

As Blessed Moreau wrote to the community, “I ask you to obtain from St. Joseph for us all, and especially for me who feels myself most in need of his aid, the grace of not hampering in any way the work which God has been pleased to entrust to us; rather, [I] ask that we may cooperate in every way with His designs by refusing no sacrifice to His grace. In other words, let us pray to him [St. Joseph] for the grace always to judge, feel, speak, and act according to the inspirations of the Holy Spirit.”

Our Lady of Sorrows

The entire Congregation has been entrusted to the patronage of Our Lady of Sorrows.

The Sacred Heart of Jesus

The priests of the Congregation of Holy Cross are entrusted to the patronage of the Sacred Heart of Jesus.