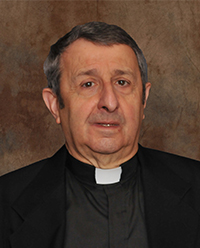 Rev. Francis Cafarelli, C.S.C., serves as a member of the Formation Staff at Moreau Seminary. Friday night Fr. Cafarelli, preached the following homily at Lucernarium, the prayer vigil the night before Adam Booth, C.S.C., and Patrick Reidy, C.S.C., professed their Final Vows of Chastity, Poverty, and Obedience according to the Constitutions of the Congregation of Holy Cross.

In the Catholic Study Bible that many of you know, the editors have marked off the Letter to the Romans into six sections. Tonight's reading comes from the last section which the editors have titled "Duties of Christians." Let this be taken to mean: be and do what you are, what you have become as a result of your Baptism and the continuing effects of the sacraments. In Constitution 1 #2 something similar is said: "We had already been initiated into his Church…But there seemed to come a time when the Lord was calling us to take some further step" picking up on the very first words of Constitution 1: ""Come. follow me." It was the Lord Jesus calling us." This gives, some foundation for why we gather around Adam Booth and Patrick Reidy on the this eve of their forever commitment to the life of the Congregation of Holy Cross - denominated so frequently as an apostolic religious community.

Constitution 1 #3 speaks of giving over one's life "in a more explicit way," from a call to serve all people based on faith in a person, in the Lord who lived, died and rose for us and who offers a share in his enduring life – overcoming sin and death. The opening verse of the 12th chapter of Romans says something about the need for these Christians to offer their bodies (that is, offer themselves) as "living sacrifices" – "living sacrifices" I take to mean on-going, never ending, thoroughly devoted to the worship and service of God, and, through ones gifts, devoted to the care and building up of the people to whom one is called. 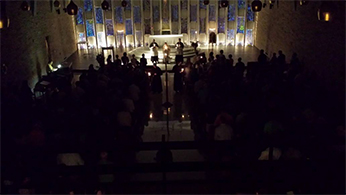 The Letter to the Romans, which calls for the use of God's gifts for the benefit of the community, calls also for a humility that works to make apostolically effective the gifts given for the body of the community, the Church, and for all the seeking and wandering people of the world. We can all rejoice and celebrate that here tonight are two men who have made a very decent beginning on the way to being excellent members of the body of Holy Cross and likewise excellent members of the Body of Christ alive and on its way as His Church. A beginning – but the beginning here is not the easy part; it is long and it takes a great deal of dedication to realize one's place in the body and to refine the gifted place and the role one has now been called to in this way of living. For them it meant a commitment to a continuation and strengthening of a foundation so that the whole body may be further joined toward a more perfect humanity on its path to its divine destiny. We applaud and thank Adam and Pat for accepting the call to "some further step" and for their already generous giving of themselves to the body of this community and to the wider body of Christ in the world; for offering themselves and their gifts, as Romans indicates; and, for the exercising of them in whatever way is called for as the days go on. 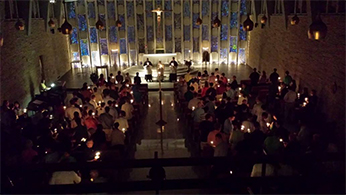 The path to which they committed themselves was to live the vows, walking side by side with the brothers in community, following the Lord – walking with brothers who followed that band of men of Holy Cross – not just following but walking along with the members of Basil Moreau's community – walking together behind and toward the Cross of Christ. (C. 1 #5)

St. Paul pursues the image of the body and its parts in First Corinthians 12 – reflecting what has been said in the reading from Romans – "now you are Christ's body, and individually parts of it." (I Cor. 12:27) This refers to the roll of ministries in the body, among them apostles, prophets, and teachers. All parts are not the same but all are necessary to the organic health and growth of the body, and these gifts, as essential and exalted as they may be, are ultimately for something greater – the spiritual gifts, the greater values and needs of the body of believers, and as we know in I Corinthians 13 – we, each one and all together strive for the greatest of gifts -Love - that which we seek in the One whom we seek, each one and together - our God: Father, Son and Spirit.

In a document on the consecrated life, Pope John Paul II says: "In our world where it often seems that the signs of God's presence have been lost from sight, a convincing prophetic witness on the part of consecrated persons is increasingly necessary. …as evidenced in the following and imitation of the chaste, poor and obedient Christ, who was completely consecrated to the glory of God and the love of his brethren." (Vita Consecrata #85) And, returning to the notion of offering oneself as a living sacrifice, let Adam and Pat and all of us attend to standards offered by Peter Chrysologus: "Each of us is called to be both a sacrifice to God and his priest. Do not forfeit what divine authority confers on you. Put on the garment of holiness, gird yourself with the belt of chastity. Let Christ be your helmet, let the cross on your forehead be your unfailing protection. Your template should be the knowledge of God that he himself has given you. …God desires not death, but faith…thirsts not for blood, but for self-surrender, …is appeased not by slaughter, but by the offering of your free will." (see: Christian Prayer, p. 2000)

To be a member of a religious community – and for that matter, a parish, a faith centered school or institution, or indeed a family, is to be a part of a body which is a living representation of the greater more perfect body of Christ in the world. Like a church building, but here living, a faith centered body shows some level of Christ-like life to an observing world. The quality of that life is noticeable, or it should be. Our community is in some manner a representation of the Church instituted and called by God in Christ and the Spirit, to live and to show the possibility and the reality of living as a people of God, a people formed by God, as people destined, if faithful, to union with God in eternity.

Adam and Pat have chosen to be a part of the body of Holy Cross, a living and representational church, so to speak, wherein life is lived in such a way that others may say "See how they love one another." And, as Constitution 4 #42 continues: "We" that is, our religious community, "We will be a sign in an alienated world: men who have, for love of their Lord, become closest neighbors, trustworthy friends, brothers." Is this not what God calls all to become – calls all to a goal that people, perhaps unknowingly, are seeking? Adam and Pat have joined a band heading, however imperfectly, toward the Lord. These men, we now presume, will support and strengthen the journey together of all of us in our community.

Faith, self-surrender, offering of one's free will – these are what are called forth when someone falls in with a "great band of men…who had made and lived by their vows, men who had walked side by side in their following of the Lord." (C. 1 #5) These are called "servants [who] will fare no better than [their] master" (C. 8 #121) The Cross always before them, the Cross as their goal – because it opens onto the full and final presence of the God who made and calls us – "Ave Crux, Spes Unica" as Moreau told us – The Cross our only hope. (see: C. 8 #113)

We like to refer to Constitution 8 #122 because it tells us that the company we have joined makes a path leaving deep prints, as of men greatly burdened. But, this passage says "they did not trudge…" I should like to tell Adam and Pat that in the days to come it will be a smooth and lightly appointed stride; but, they already know that in their individual journeys such is not true! But here they are not alone; they walk now with the continuing successors and brothers in this band of men and together - ultimately and paradoxically because of the Cross- they will understand themselves to be and to be experienced by others as men "who did not trudge; they strode. For they had the hope."

God bless Adam Booth and Patrick Reidy, their families, and, the family of Holy Cross.