And, as in every work of our mission, we find that we ourselves stand to learn much from those whom we are called to teach. (Constitution 2:16)

One of the things that we as Holy Cross religious hang our hat on is our sense of hospitality. We take great pride in being able to welcome and host, to bring in and provide a sense of community. In fact, André House is called a “House of Hospitality,” rather than a soup kitchen, homeless shelter or drop-in center. This is a really important piece of the mission there.

I was struck midway through my time there, though, that the lesson I was learning in hospitality was not about my creating it or giving it; I was receiving it. The staff welcomed me and the other CSCs with open arms, greeting us like family and plugging us right into the work. And the guests treated us like we were old friends. At a place like André House which is blessed with so many volunteers, the volunteers change more frequently than the guests. And while I thought that I might be going there to make folks feel a sense of welcome and belonging, it was the guests and the staff who extended this to me. Their openness, receptivity, and hospitality flipped the script on what I expected. We ourselves, indeed, stand to learn much from those we are called to serve.

As Holy Cross religious, each of us who went down to André House wore around our necks the Cross and Anchors, the symbol of the Congregation of Holy Cross and of our profession in it. The cross and anchors also adorn the main gate at André House. The connection between these two things, for me, served as a visible, sacramental reminder to the guests and those we were serving, of the hope that we seek to bring through our ministry and religious life.

This symbol, on the gate and on our necks, we hope, gives evidence to the entirety of André House, to the religious and staff who serve there, and to the guests, that the cross and anchors, and the hope that it symbolizes is a living, breathing, vivacious reality! This isn’t a far off, distant hope, but one that lives and moves and has being – in our community!

All of us are involved in the mission: those who go out to work and those whose labors sustain the community itself, those in the fullness of their strength and those held back by sickness or by age, those who abide in the companionship of a local house and those sent to live and work by themselves, those in their active assignments and those who are still in training. All of us as a single brotherhood are joined in one communal response to the Lord’s mission. (Constitution 2:18)

When it was announced to our local community that myself and 5 other young CSCs would be going to André House for a short term, our provincial sent out an email calling it a “sign of hope.” Admittedly, I thought that this might be overblown; I was just responding to a request and helping out. But then I started to get emails and comments from folks. One religious said to me that we would “be the hands and feet of the province,” like the prayer “Christ has not hands now but yours, not eyes but yours…”. He said that he and many others wanted to so desperately be able to serve and respond in some way, but couldn’t because of age or circumstance. The work I was doing took on a much more communal dimension as I reflected on these comments. I wasn’t only contributing my own efforts to this, but that of the whole community.  All were involved in this mission, each in their own way. 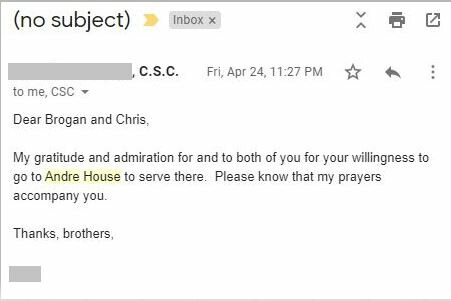 The gratitude and graciousness of the community continued upon my return from André House. I did a period of quarantine in my dormitory residence when I returned and even though I was physically isolated from the community, I was, again, surrounded by the love and support of community as members reached out, delivered meals and checked in on me while I quarantined. This graciousness breathed life into a part of the constitutions that I had not had cause to experience yet first hand: “A community must reach out in purposeful and sensitive ways to members who are sick or sorrowful or often absent. When members retire or encounter a breakdown of health, we must have communities to receive and provide for them.”  (Constitution 4:37) Thanks be to God that my physical health was not compromised, and thanks be to God for so many for making sure my spiritual and communal spirits remained in as good of condition!

Fr. Brogan Ryan, C.S.C., was born and raised in Columbus, Ohio, the sixth of eleven children with a twin brother. He is in his second year as Rector of Keough Hall. After graduating from Notre Dame with a degree in Accounting, he taught middle school Religion and Math in Montgomery, Alabama with the Alliance for Catholic Education. Following a quick detour into the world of public accounting, Fr. Brogan returned to South Bend to enter Moreau Seminary and formation with the Congregation of Holy Cross. He finished up his theology studies at Notre Dame in 2018 while serving as an Assistant Rector at Keough Hall. Fr. Brogan was ordained a priest in April 2019. He currently helps lead Notre Dame's RCIA process, working with folks who are interested in becoming Catholic.

The U.S. Province sent a small cadre of young religious to provide support. Upon return, the religious headed back to their homes for a 14-day quarantine, and a group of eight young men in formation followed in their footsteps to assist and again return to quarantine. We appreciate the service of these men and the formation staff for organizing this.