It may seem strange to open the page to a reflection on the Cross when Easter is still in our hearts and on our lips and we proclaim that the cross has been conquered by the Lord. But in fact, the cross is very present in the lives and liturgies of Peruvians during these days. In Chile, México and Perú, we've just celebrated – and in some places continue to celebrate – the Feast of the Exaltation of the Cross. 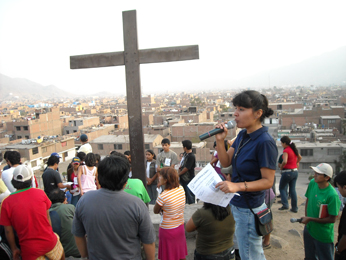 Throughout Perú wooden crosses – usually large and very heavy – are carried in hours-long processions through the hills and on the streets all over the country. With eagerness, respect and profound devotion, people wait their turn to carry or help carry the enormous cross along its route. It's estimated that in the Southern city of Tacna alone, more than 300 of these large crosses are carried in procession from outlying areas to the cathedral in the center of town.

In the parish this past week-end more than 20 such crosses were carried in long afternoon and evening processions, which attracted the young and old, healthy and infirmed. And given the rugged rocky hills that dominate the parish landscape, they were more rigorous (and potentially dangerous) hikes than easy walks. The crosses belong to the neighborhoods and are kept in local chapels to be brought out on this occasion.

True to the title of the Feast of the Exaltation of the Cross, the processions, accompanied by brass bands and firecrackers, seek the high ground as their destination. The crosses which come from different directions converge on hillcrests to be exalted – raised on high – and to be seen by all. 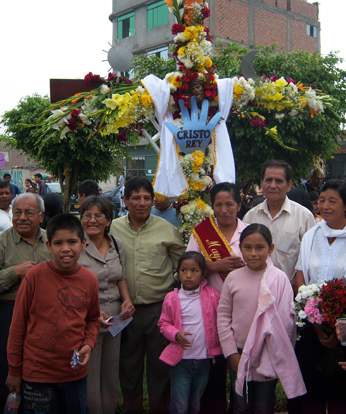 The crosses are elaborately decorated with flowers to reflect the festive nature of the occasion and the great devotion to the Cross. But even more so, the flowers symbolize the faith the people have in the new life that the Cross of Jesus promises.

This would not have been a particularly unusually celebration of the day of the Cross for me if it had not been for a brief conversation in the sacristy that Sunday morning just before Mass.

"My daughter's in bad shape," Carmen said, just before her tears began to flow quickly and profusely – but briefly – because she had to get in line with the other ministers who were about to begin the entrance procession. Those few words were all it took to bring back to my mind her story which I was painfully aware of – about a daughter who vacillated between hope and failure in what seemed a life-long battle against a drug addiction, and now once again had fallen. Carmen didn't need more than those few words to communicate the tremendous anguish that completely overwhelmed her that brief moment in the sacristy.

That would be one of those occasions when I would learn so much more than I was going to be able to teach. I think I gave a decent homily that morning, but she was the teacher that day. She knew so much about the Cross and the hope it carries, and she shed a brilliant light on what our Constitutions have to say about the Cross of our Hope. 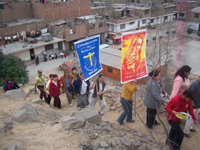 After she had done the reading, directed the communion "traffic" and helped clean up after Mass, she headed off to the procession of the crosses, where she would walk for hours helping others carry the cross just as she carried hers so much of her life – head held high and as if the Cross and she has become life-long companions. There were perhaps few others there who could carry the Cross with so much authority.

She, faithful to the gospel, took up her cross daily and followed Him (Constitutions of the Congregation of Holy Cross, 8:112). She encountered and accepted suffering … and so could move without awkwardness among others who were suffering and looked to her for support (8:118). And drawn by the Cross of Jesus into the Resurrection, she walked by Easter's first light which made her long for its fullness (8:119). She knew the Cross very well. It was her Hope.

Fr. Don Fetters, C.S.C., is a member of the District of Peru, one of several foreign missions overseen by the United States Province. He is a monthly contributor to the Spes Unica blog reflecting on the work of Holy Cross in the missions. Learn more about the missionary work of Holy Cross priests and brothers to extend the Good News of Jesus Christ across "borders of every sort," including Peru.