"Behold, I am the handmaid of the Lord. May it be done to me according to your word."

Prior to the start of classes, the men of Old College and Moreau spend a week of orientation, brotherhood, and prayer at Holy Cross' LaPorte Center in nearby LaPorte, Indiana. The week is a beloved, long-standing tradition as it provides plenty of time for prayer, recreation, and relaxation. The theme of this year's camp was "Trusting in Divine Providence", and we were joined by several Holy Cross religious who shared about God's providence in their own lives. 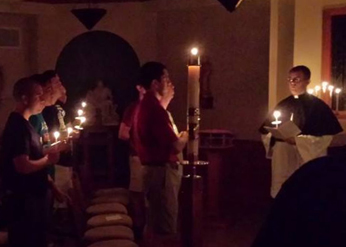 While each of these men came from a different background and offered unique stories and insights, I was struck by one thing that they all had in common. Namely, their idea that while trusting in Divine Providence is difficult, it serves as a source of hope. It reminds us that we are a part of something much greater than ourselves, and so fosters a greater dependence on God.

Throughout the week, I couldn't help but think of the Blessed Virgin Mary and her unwavering trust in divine providence. In particular, I reflected upon the Annunciation. Because I am so familiar with the encounter between the Angel Gabriel and Mary, I often take for granted Mary's "Yes" as the ultimate sign of trust in Divine Providence. It is important to remember that Mary did not know what her "yes" would ultimately entail. She could not have fully anticipated the losing of the child Jesus in the Temple, having to watch Him die on the cross, and eventually serving as a witness to His resurrection from the dead. Despite her uncertainty, she still said yes, continued to say yes along the way, and now shares in the fullness of God's glory. 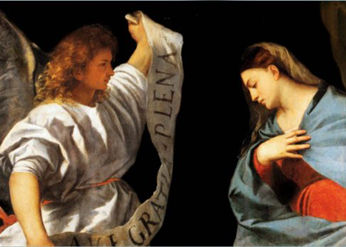 As disciples of Christ, we are called to do just the same. Like Mary, we are asked to embrace God's will by setting aside our own plans and selfish desires. No doubt we will encounter loss and sorrow along the way. Perhaps we will bear the loss of a loved one, battle an illness, or be the victim of some natural disaster. Although our paths will be met with suffering, they do not end there. As St. Paul in his letter to the Romans says, "we suffer with Him so that we may also be glorified with Him" (Romans 8:17b). Let us then follow in the footsteps of Mary by surrendering ourselves to the will of God and trusting in Divine Providence, so that we too may share in the glory of God.