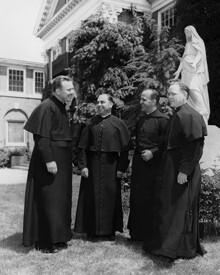 Stonehill College was founded in 1948 in Easton, Mass., by the Congregation of Holy Cross. The Congregation had acquired the property for use as a seminary in 1935 and the charter was later amended to allow the establishment of the small, liberal arts college for men, but became co-ed soon after.

Stonehill’s undergraduate program offers 32 major programs in the liberal arts, natural sciences and business, with more than 120 faculty members, 81 percent of whom hold doctoral degrees. Since its first commencement exercises in 1952, the College has graduated more than 20,000 students.

Faithful to the Holy Cross tradition in education, Stonehill is committed to developing the moral, spiritual, intellectual and social competencies of its students, as well as fostering the determination to bring these competencies to bear on matters of social justice.

Because of Stonehill’s engaged student body, the Carnegie Foundation has awarded the College its Community Engagement Classification in two categories, “Curricular Engagement” and “Outreach and Partnerships.” It has also been named to the President’s Higher Education Community Service Honor Roll “With Distinction” for exemplary service efforts and service to disadvantaged youth. Academically, the College is ranked in the top tier of national liberal arts colleges by U.S.News & World Report.