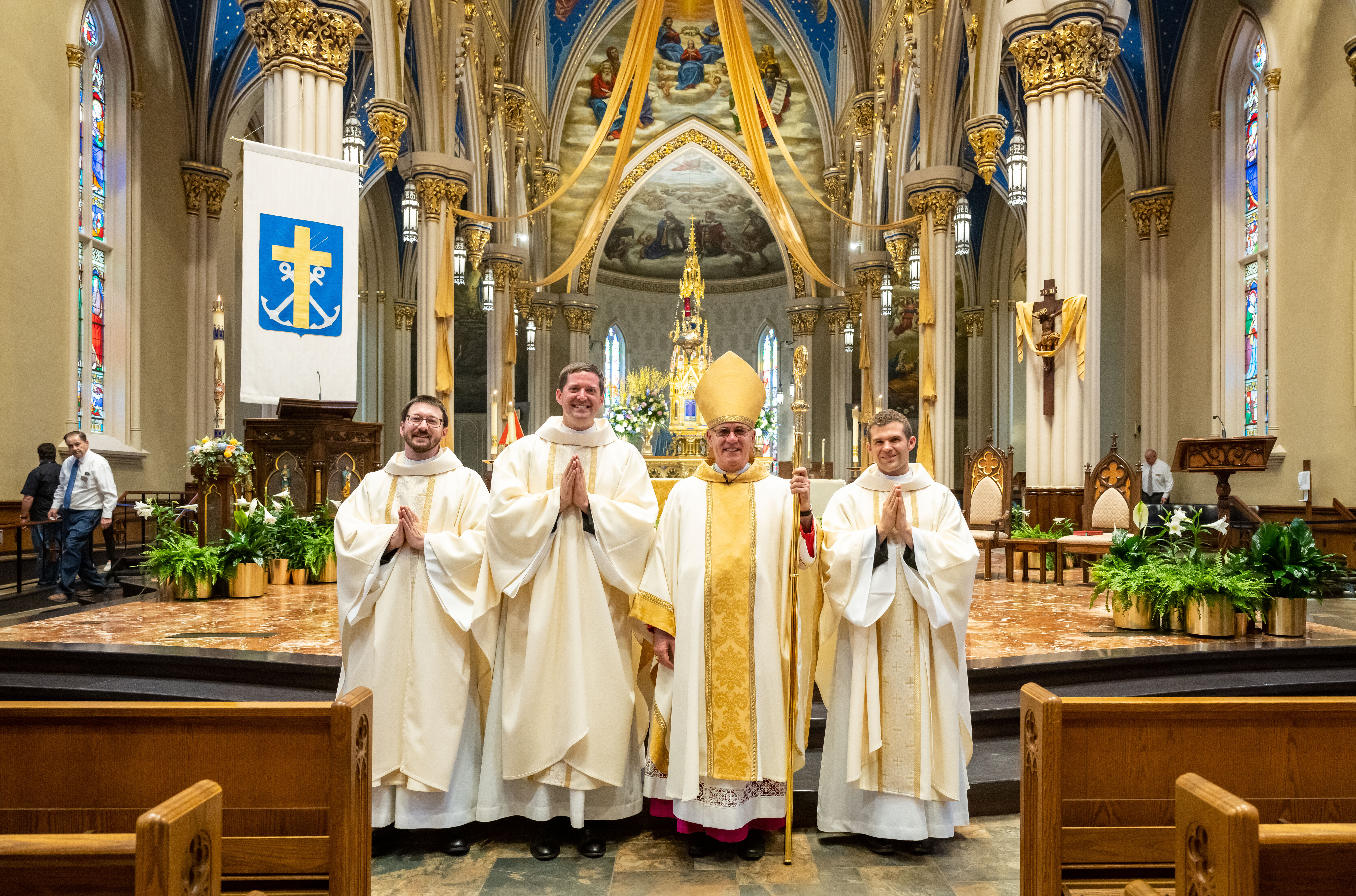 Deo gratias! On April 23, 2022, the Congregation of Holy Cross joyfully celebrated the priestly ordination of Fr. Drew Clary, C.S.C., Fr. Cameron Cortens, C.S.C., and Fr. Gabriel Griggs, C.S.C., at the Basilica of the Sacred Heart on the campus of the University of Notre Dame. In celebration of their new apostolates as priests, the Office of Vocations is also pleased to reflect on the many ways in which they have served the Church even during their years of formation:

A native of Castroville, Texas, near San Antonio, Rev. Drew Clary, C.S.C., is the oldest of three children of Pamela and Richard Clary. He graduated with a B.A. in economics and political science from the University of Notre Dame in 2009. He earned a master’s in education through the Alliance for Catholic Education (ACE) in 2011. Fr. Drew entered formation with the Congregation of Holy Cross in 2015 and earned his Master of Divinity in 2021.

Fr. Drew taught religious education at St. Adalbert Parish (South Bend, Indiana) from 2015 to 2016 and worked at La Parroquia de Nuestra Santísima Madre de la Luz (Nuevo León, Mexico) during the summer of 2016. While at the Holy Cross Novitiate (Cascade, Colorado) from 2016 to 2017, Fr. Drew served at Penrose Hospital, Catholic Charities, Namasté Alzheimer Center, and Sacred Heart Parish. In addition, he assisted at the Catholic Worker from 2017 to 2018 and completed a language immersion program in Puebla, Mexico, during the summer of 2018. He also led small-group Bible studies for Notre Dame Campus Ministry from 2018 to 2019 and spent the summer of 2019 at the Oratory of St. Joseph in Montreal. Fr. Drew was a pastoral associate at O’Neill Hall (University of Notre Dame) from 2019 to 2020. In the summer of 2020, he began living and ministering at St. Adalbert and St. Casimir parishes (South Bend, Indiana), where Fr. Drew continued as a transitional deacon in preparation for priestly ordination. He will continue to serve at St. Adalbert and St. Casimir parishes.

Fr. Cameron is the oldest of four children of Caroline and Andrew Cortens of Boise, Idaho. He graduated with a B.A. from the University of Notre Dame in 2013, where he also received his Master of Divinity in 2021.

During his first year of formation in 2014 to 2015, Fr. Cameron assisted with First Communion preparation at St. Adalbert Parish (South Bend, Indiana). During his novitiate year from 2015 to 2016, he provided spiritual care at Penrose Hospital and at Namasté Alzheimer Center, ministered to the homeless at Marian House, and participated in various Sunday ministries at Sacred Heart Parish in Colorado Springs, Colorado. Fr. Cameron was a life-skills counselor for Stone Soup Community (South Bend, Indiana) from 2016 to 2017 and a service-learning experience instructor at Holy Cross College (Notre Dame, Indiana) from 2017 to 2018. Fr. Cameron served at La Parroquia Nuestra Madre Santísima de la Luz (Nuevo León, Mexico) from 2018 to 2019 and worked for Catholic Peace Fellowship (South Bend, Indiana) from 2019 to 2020. He served as an assistant rector at Keough Hall (University of Notre Dame) from 2020 to 2021. Fr. Cameron spent his diaconate year at Holy Redeemer Parish (Portland, Oregon), and he continues to serve there to this day.

Fr. Gabe grew up in South Bend, Indiana, and is the oldest of three children of Ann and Gladden Griggs. After receiving his B.A. in liberal studies and applied mathematics from the University of Notre Dame in 2014, Fr. Gabe completed one year of graduate work in statistics at Purdue University. He received his Master of Divinity from Notre Dame in 2021.

Fr. Gabe directed a parish discussion group at Holy Cross Parish (South Bend, Indiana) during 2015 to 2016, his first year of formation. From 2016 to 2017, while at the Holy Cross Novitiate (Cascade, Colorado), he served at the Marian House soup kitchen and Namasté Alzheimer Center. From 2017 to 2018, Fr. Gabe worked at Ryan’s Place Children’s Grief Support Center (Goshen, Indiana), helping children and teenagers who lost loved ones. He spent 2018 to 2019 teaching the Common Good Seminar at Holy Cross College (Notre Dame, Indiana) and 2019 to 2020 as a chaplain for the Program of Liberal Studies at the University of Notre Dame. During his final year of formation, Fr. Gabe designed and taught a biblical interpretation course for alumni of the Program of Liberal Studies. He spent his diaconate year in preparation for priestly ordination as the rector of Keough Hall, a men’s residence at the University of Notre Dame. He continues in this role as a priest. 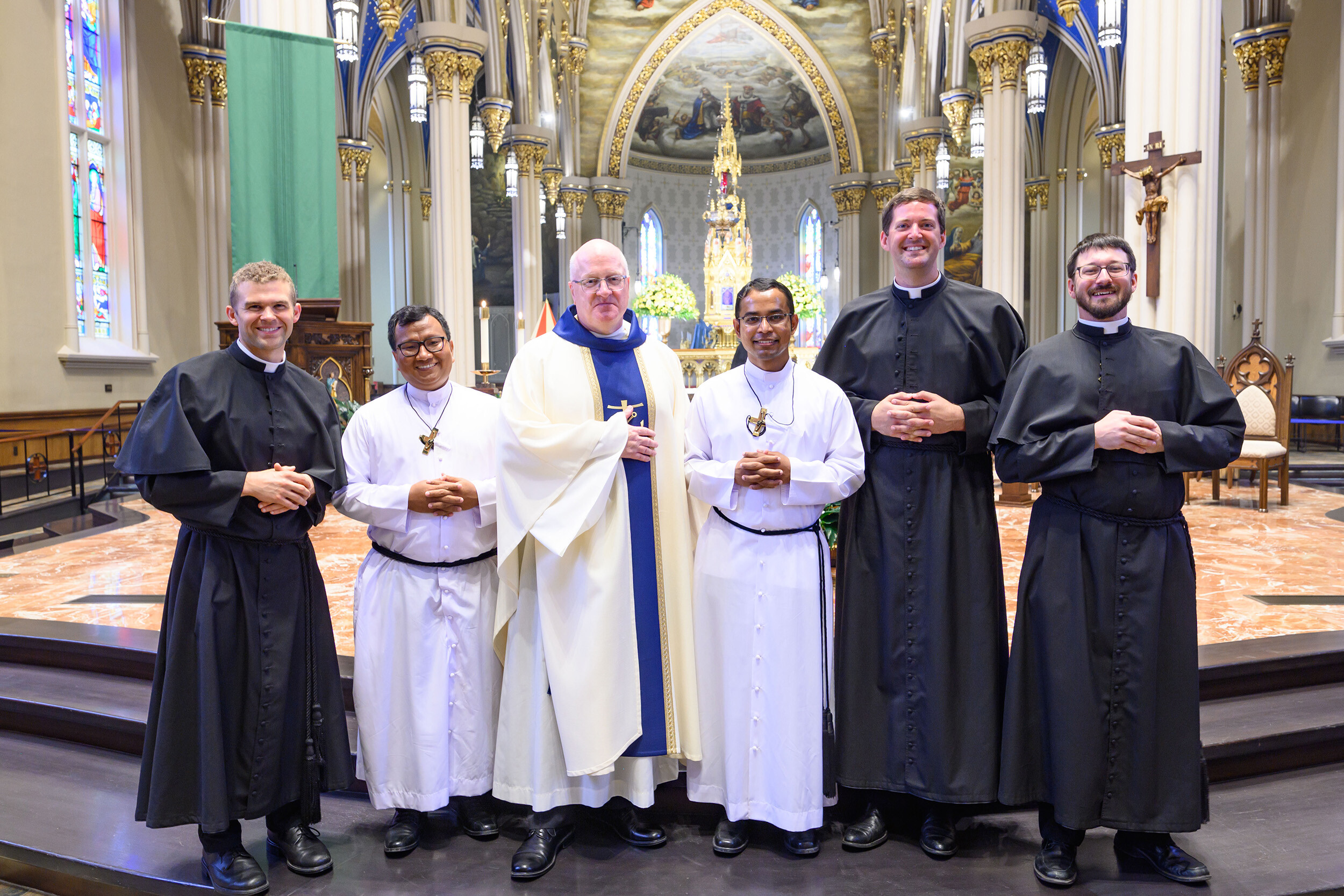 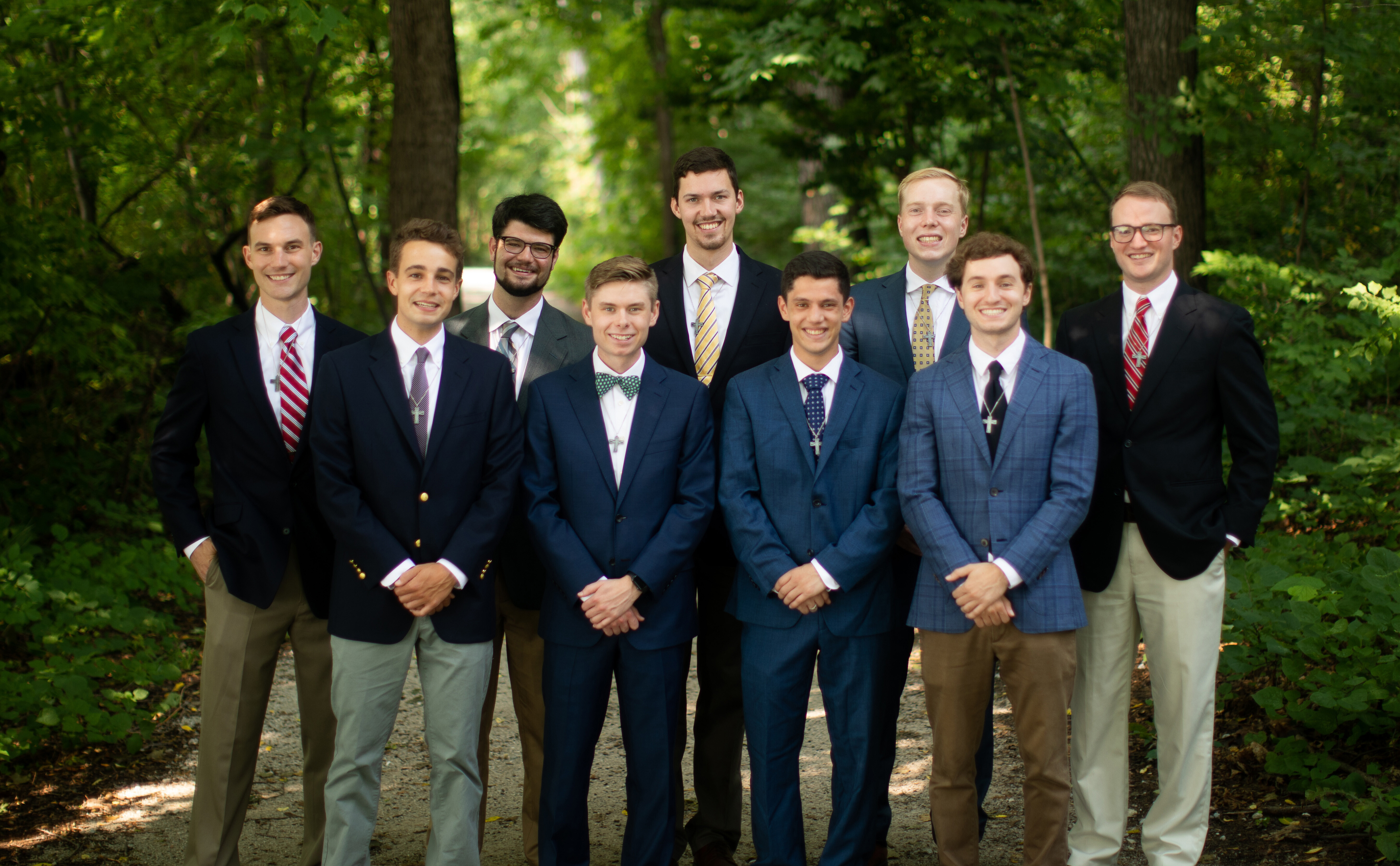 Meet the Postulant Class of 2021