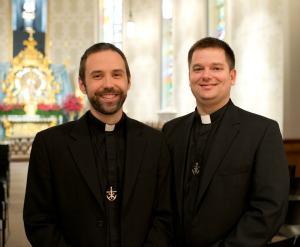 Personal attention and an engaging, interactive online social media presence has led to one of the largest seminary classes in recent years for the Congregation of Holy Cross, U.S. Province of Priests and Brothers.

The 16 Postulants represent the largest seminarian class since 1999 for the U.S. Province. This year's Holy Cross seminarian class comes from 15 different states, Canada, England and Ireland and from all walks of life, with diverse educational backgrounds, hobbies and interests. But they all share common goals: to serve God with zeal and to become Men With Hope to Bring as they begin to live out the charism of Holy Cross during their formation.

For some of this year's new postulants, their first interaction with Holy Cross came at a retreat weekend: The next "Come and See" Weekend for high school seniors is planned for Sept. 27 to 29 at Old College Undergraduate Seminary on the campus of the University of Notre Dame. The next College Discernment Retreat for college sophomores, juniors and seniors is Oct. 26 to 28 at Holy Cross Center in La Porte, Ind. A second Come and See Weekend is planned for Nov. 8 to 10. And a retreat for high school juniors is scheduled for March 21 to 23, 2013.

The retreats give the men a chance to learn more about the charism and work of Holy Cross, participate in daily Mass and prayer and to share meals and personal experiences with members of the Community.

The U.S. Province's Office of Vocations uses social media to not only spread the word about these retreat weekends, but to also increase the presence and general awareness of Holy Cross on the internet. Young men considering a vocation to the priesthood and religious life are able to learn more about the history, mission and community of Holy Cross through Facebook, Twitter, YouTube , Flickr and blogs.

"It has become one more place where we can connect with those who are interested in considering a vocation to the religious life or priesthood," said Vocations Director Rev. James T. Gallagher, C.S.C. "We use social media as a way to make ourselves known to those young men discerning a call to religious life. But the personal interaction still comes first. Our social media outlets are just tools we use to help make Holy Cross known, share discernment tips and help deepen a man's prayer life."

All men considering a life in Holy Cross get the personal attention of the Vocations team: Director Fr. Gallagher and Associate Director Rev. Andrew Gawrych, C.S.C. Throughout the year, the team speaks with more than 100 young men attending Vocations retreats and discernment groups on Notre Dame's campus who are discerning a call to the priesthood or religious life.

So what's the process of becoming a priest?

With 55 total men in formation this fall, the U.S. Province's vocations program is among the healthiest for Catholic religious orders in the United States. In the spring of 2013, three men will be ordained into the priesthood; two are in the process to be ordained in 2014; and in 2015, as many as six could be ordained.

The entire U.S. Province membership is comprised of nearly 500 men, including priests, brothers and those in formation around the world. Today there are about 1,200 Congregation of Holy Cross Religious worldwide in 16 countries on five continents.

For more information on Vocations, please visit holycrossvocations.org. To find out more information on any of the upcoming retreats, email or contact Fr. Jim Gallagher, C.S.C., or Fr. Drew Gawrych, C.S.C., in the Office of Vocations, at 574-631-6385. The deadline to register for the September Come and See Weekend is Sept. 17; the deadline for the Undergraduate Retreat is Oct. 8; and the deadline for the November Come and See Weekend is Oct. 25.