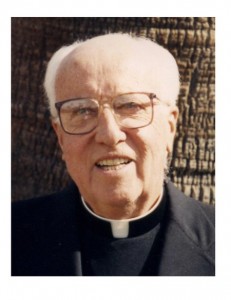 Fr. Wheeler was born in Roscrea of Tipperary, Ireland, in 1918, the son of Martin and Mary (Phelan) Wheeler. He was the third of four children, three sons and a daughter. He attended St. Lawrence O'Toole Parish School in Dublin. In those years early years, he learned quite clearly that the Irish Fathers were always right and he pretty much followed the life of a typical "Irish-Catholic-Boy." However, all of this was short lived because at the age of 11, he became part of the Irish Immigrant Generation. Bag and baggage, the family pulled up stakes and headed "Immigration style" to Brooklyn, N.Y. St. Paul's Parish School in Brooklyn was where Fr. Wheeler received his formal education.

His formation included the Little Seminary, Novitiate, Moreau Seminary and finally Holy Cross College in Washington, D.C. On June 13, 1947, he was ordained in Sacred Heart Church, Notre Dame, IN.

His graduate studies began at Notre Dame and continued at Catholic University in Washington D.C. in 1952. Upon completing his Doctorate in biology, he taught at the University of Portland from 1952 to1964. In 1964, he was Chaplain to the Salzburg Program in Austri. He returned to the University of Portland until 1967. From 1967 to 1968, he taught at St. Dominic College in St. Charles, Ill., and then moved to Dacca, East Pakistan, to teach at Notre Dame College, where he ultimately became Rector. Upon returning to the United States, Fr. Wheeler was part of the Institute for Clergy Education, University of Notre Dame, and then was the Chaplain at St. Francis High School, Mountain View, Calif. Starting in 1977, he had a variety of assignments, moving to Christopher Lodge (Cocoa Beach, Fla.), Casa Santa Cruz (Phoenix), Our Lady of Fatima House (Notre Dame) and finally Holy Cross House at Notre Dame.

Fr. Wheeler was preceded in death by his parents, Martin and Mary (Phalen) Wheeler, two brothers and a sister.

Viewing and a wake service for Fr. Wheeler were held in the Chapel of Moreau Seminary, University of Notre Dame, on Tuesday, July 12, 2011. The funeral Mass was celebrated at the Basilica of the Sacred Heart, Notre Dame, on Wednesday, July 13, 2011.