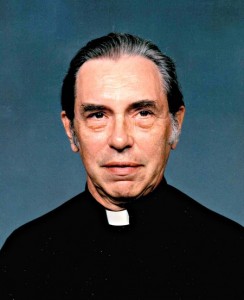 Fr. Fahey attended elementary school at St. Rose (two years); St. Ignatius (two years); St. Malachi (three years; and St. Augustine (one year) in Barberton, Ohio. He graduated from St. Vincent High School, Akron, Ohio, in 1947. In the fall of that year, he enrolled at the University of Notre Dame as a freshman and also entered the Seminary for the Congregation of Holy Cross. On August 15, 1948, Fr. Fahey entered the Novitiate in South Bend, Ind. He made First Profession of Vows on August 16, 1949, and Final Vows on June 3, 1953.Fr. Fahey graduated from the University in 1952 with an A.B. degree in Philosophy and was ordained to the priesthood at Notre Dame on June 6, 1956.

After his Ordination, Fr. Fahey taught at Notre Dame High School in Niles, Ill. In 1957, he became Chaplain and taught Scripture and the Sacraments at St. Edward's University in Austin, Texas, for the next two years. From 1959 to 1962, Fr. Fahey served as Assistant Pastor at St. Ignatius Martyr Catholic Church, Austin. He then moved back to South Bend, Ind., serving as the Assistant Pastor at Christ the King Parish and Chaplain of Columba Hall while continuing his graduate studies at Notre Dame. In 1964, he earned a M.A. in Sociology; after which, Fr. Fahey was assigned to parish and hospital ministry in Trujillo, Peru, where he also became involved in the Christian Family Movement.

Fr. Fahey returned to the United States after two years to teach at Notre Dame High School; and then in 1967, he joined the Congregation's Southern Province. He worked in Campus Ministry at Northwestern University in Natchitoches, La., while also serving as Pastor at Holy Cross Church. After eight years in Louisiana, he was asked by then-Southern Province Provincial Superior Rev. Chris O'Toole, C.S.C., to found a parish in the Diocese of Galveston-Houston, Texas. On June 1, 1976, Fr. Fahey established St. James the Apostle Parish in Spring, Texas, with 250 families. Masses were held at Teague Middle School until February 1979. Construction of St. James began in January 1978 and the church building was dedicated on June 10, 1979. When Fr. Fahey left St. James as Pastor in 1981, there were more than 1,300 families.

From 1981 to 1985, Fr. Fahey studied liturgical architecture the University of Notre Dame. From 1985 to 1990, he served as Chaplain and Assistant Pastor of St. Francis Hall in Mishawaka, Ind., and St. Hedwig's Parish in South Bend, respectively. In 1990, Fr. Fahey returned to Texas to serve as Pastor of Our Mother of Sorrows Parish in Burnet for two years. He then went to Sacred Heart of Jesus Parish in New Orleans as the Assistant Pastor from 1992 to 1993. He moved back to South Bend in 1994 to again serve as Assistant Pastor at St. Hedwig's Parish until 1996. Fr. Fahey also worked at St. Adalbert Parish for seven years. From 2003 to 2009, he served in parish ministry in Texas and Louisiana.

In 2009, Fr. Fahey returned to South Bend to live at Our Lady of Fatima House and later moved to Holy Cross House in 2012, where he died.