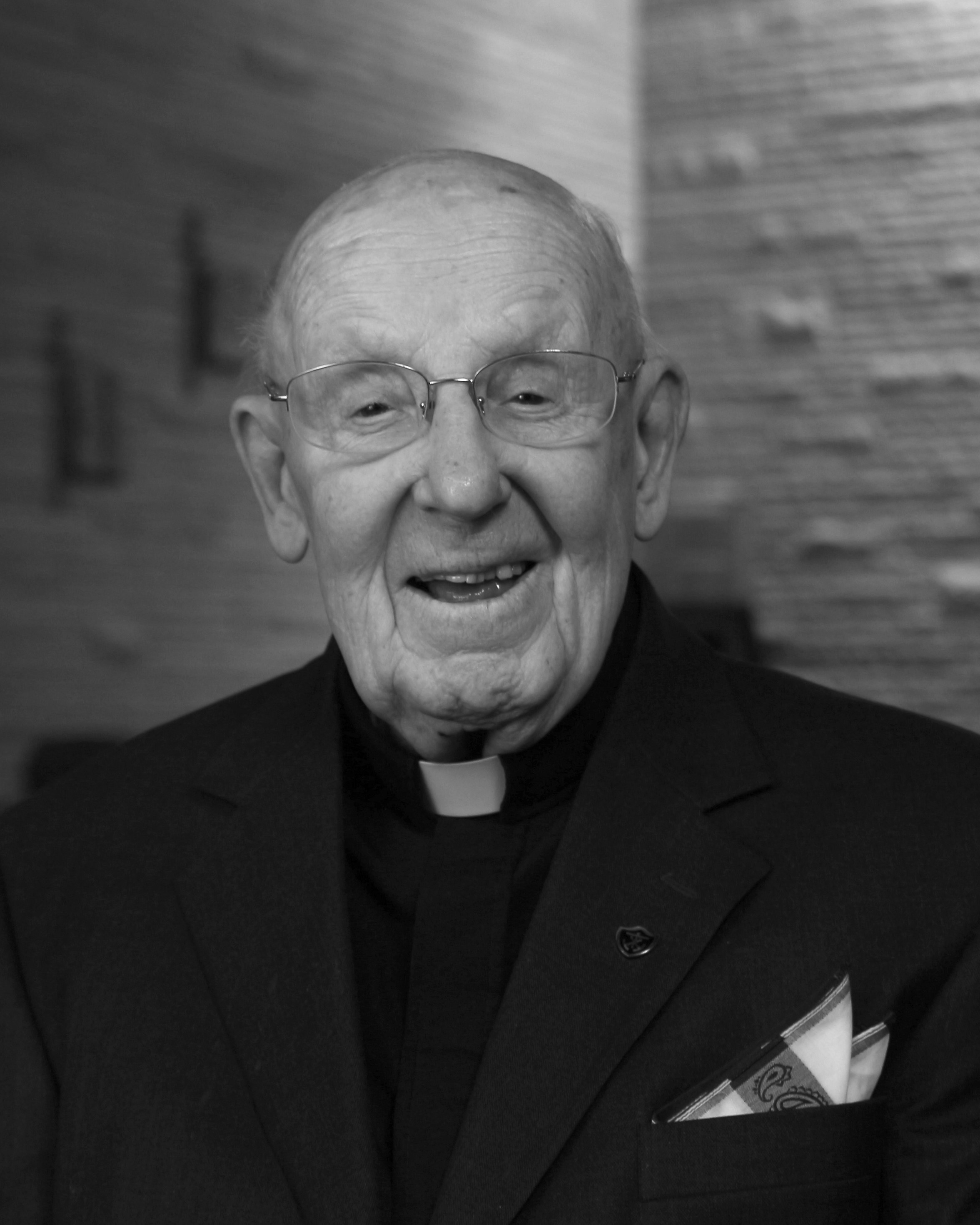 Fr. Clem was born on October 24, 1924 in Carpio, N.D., to Edward and Cecelia (Keller) Clementich, the first of eight children. He attended Muskego Township Grade School, a rural one-room elementary schoolhouse in Carpio, North Dakota, and graduated from St. Leo Catholic High School in Minot, North Dakota in 1945. After graduating high school Fr. Clem joined the United States Army and served as a postal clerk overseas for three years in Berlin, Germany. While serving in the Army, he attended daily Mass and was asked by Rev. Maurice Powers, C.S.C., the chaplain at the time, if he would be interested in becoming a chaplain’s assistant to help prepare the huge drill halls for Mass every Sunday. After his tour ended, Fr. Clem heard the call from God to become a Holy Cross priest.

After entering the Moreau Seminary, Fr. Clem studied philosophy at the University of Notre Dame, graduating in 1953. He then went on to study theological education at Holy Cross College in Washington, D.C. He earned a masters degree in liturgy from the University of Notre Dame in 1961 and a masters degree in theology from Union Theological Seminary in New York City in 1971. He entered the Holy Cross Novitiate on August 15, 1949 at Notre Dame, professed final vows on August 16, 1953 and was ordained a Holy Cross priest on June 5, 1957 at Sacred Heart Church, Notre Dame, Ind.

Fr. Clem taught at the Notre Dame High School for Boys in Niles, IL from 1957 to 1963 before being sent to Belgium to study theology at the Lumen Vitae Institute for one year. In 1964, he returned to the United States to teach at Notre Dame High School for Boys until 1966. From 1966 to 1969 he taught at the University of Portland in Oregon before leaving to earn his masters degree in theology at Union Theological Seminary in New York city. From 1971 to 1984, he taught at St. Edward University in Austin, Texas. In 1984, Fr. Clem became pastor at Sacred Heart Parish in Colorado Springs, Colo. before leaving to study for a year at the Vatican II Institute in Menlo Park, Calif. In 1993, Fr. Clem began working in rural ministry for the Archdiocese of Anchorage where he traveled by airplane to remote villages to celebrate the liturgy and train laity so they would be able to lead. Fr. Clem wrote in his 50th jubilee of priesthood (in 2007), “I count it as one of the most satisfying ministries of my priesthood.”

The Funeral Mass will be at 9:30 a.m. on Friday, July 23, 2021 at the Basilica of the Sacred Heart, Notre Dame, Ind. You may also join us via livestream at https://campusministry.nd.edu/mass-worship/basilica-of-the-sacred-heart/funeral-live-stream/.

Burial will be in the community cemetery at Notre Dame. Kaniewski Funeral Home, South Bend, is in charge of the arrangements.

Memorial contributions in support of the mission and ministries of the Congregation of Holy Cross can be made to: United States Province of Priests and Brothers, Office of Development, P.O. Box 765, Notre Dame, IN 46556-0765 or online at https://donate.holycrossusa.org