It has been a busy spring at Fisher Hall at the University of Notre Dame! Though Fisher is a relatively small residence hall, with 183 students, we are mighty in spirit and well regarded around campus. Like all halls, the majority of students' time is spent in study. I have been impressed throughout this year with the strong work ethic of the many engineering, business, theology, science and arts majors - to name just a few! Late into the evenings (and often into the early morning!) the "Fishermen" are in the study lounge reading and writing. This afternoon I am heading to unveiling of the 2014 "Baja Buggy" that a couple of our mechanical engineers have designed and built for competition. 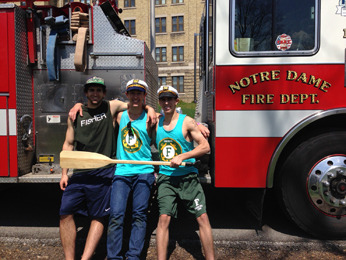 At the same time, it is important to have some fun in the midst of studies. The signature Fisher event is the Fisher Regatta each spring - this year, on April 26. Students from across campus build boats - some more sea-worthy than others - to sail across St. Mary's Lake at Notre Dame. We had 30 vessels this year, along with a cookout and music. By the end of the afternoon over 700 students had visited the Regatta to cheer on their teams. Brother Ed Luther, C.S.C., Rector of Fisher from 1986-1997 and founder of the Regatta in 1987, was the Grand Marshal and shot the pistol at 1:00pm to start the races. He reminisced about the many boats (and sinkings) he has seen over the years. Though Fisher Hall placed second in the competition, everyone had a great time and the guys have already set their sights on a victory in 2015! 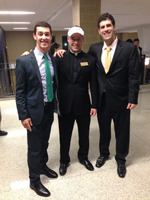 In the weeks surrounding the Regatta itself Fisher hosts several other events, including a dance, cookout, and awards ceremony. It keeps the rector busy!! The night before the Regatta I cooked a spaghetti dinner for 120 of the guys (though with college appetites I felt more like feeding 500!) It gave new meaning to the pastoral command "Feed my sheep"... I have had a blast getting to know these guys and sharing in their lives. It includes many victories and proud moments, though difficult ones too. In all of it, the central moment of our week together is the Mass on Sunday nights. We have overflowing attendance in St. Paul's Chapel at Fisher, with our resident priests Fr. Dick Warner, C.S.C. and Fr. Tim Scully, C.S.C. We pray together and worship the Lord Jesus as a community - confident that it is He who guides us to the Father. Say a prayer for my Fishermen as they finish another semester successfully and either graduate and head into the world or into busy summers.

Mr. David Halm, C.S.C., is in his third year of Temporary Vows, and is the Assistant Rector of Fisher Hall at the University of Notre Dame. David is originally from Dublin, Ohio.