A Home for Studies

A Home for Studies

Not so long after I bragged about the ministry of Holy Cross in our Parishes in Tanzania – Kitete and Kambi ya Simba – I took a turn to do advanced studies at the University of Notre Dame and live in residence at Moreau Seminary. What a change of life! 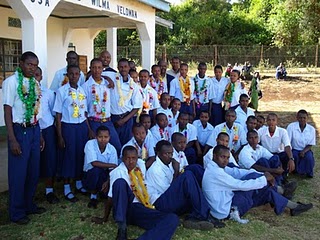 After six years of being away from anything close to serious academic activities of the theological nature, especially anything systematic, I can attest that this was not a smooth ride. It was made more difficult when I lost my best friend and prayer buddy, my 94-year-old grandmother, four days after I arrived here. This was a challenge of a lifetime.

Then came the challenge not only of refreshing my mind about different philosophers and theologians, but also catching up with what has been happening in this academic area since I finished my studies about seven years ago. Some of my professors could see my concerned face in some classes and had to talk to me.

Leaving family and very close friends that I had made in the years in Kitete and Kambi ya Simba, and beginning a new life with a new circle of friends in a different society was a tough thing to do. It was not easy to leave my home in Tanzania. Tears were shed and the exchange of hugs and gifts proved the love we have accumulated for each other for that long time together. 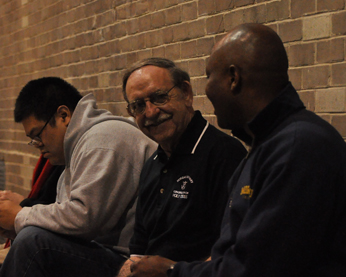 I have met young men in different stages of formation, aspiring to live religious life in Holy Cross. I have attended some of their classes with them and shared prayers and Eucharistic table with them. We also have shared meals, told the stories of our lives, and enjoyed social events.

I have found fellow Holy Cross religious who have possibly seen more than I have in religious life. I keep learning day-by-day how to live in American society, but there has not been a day that I have not thanked the Lord for the beauty of the community that I am experiencing here. I could not ask for anything more. 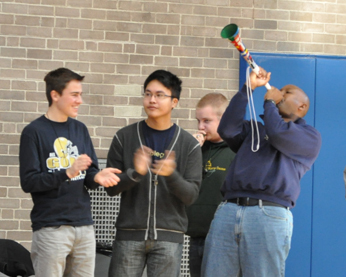 One other experience not to forget is American Football! Being a lover of soccer and a fan of the mighty "Arsenal" Gunners, American football was anything but "football." I once described it as "a bunch of strong men trying to carry the ball across the field to the other end, and another bunch of strong men trying to stop them." But, tell you what, I grew up to love the game, learning some of the rules but mostly, I learned: "Go Irish!"

I got home sick sometimes, but I had somebody sensing and asking and offering a word of encouragement. I felt confused and overburdened with academic work at times, but there was never a day that I missed the question: How does your school day look or how was your school day? And of course all these are followed by a word of courage … and thus continued proof that we are men who are walking side by side following the Lord!

I am about to complete a full year of studies, and there is no way of saying how much I appreciate the community that I have here and the studies that I am getting so much into now. And, of course, I owe this to no one else but the Congregation of Holy Cross that I am blessed to be part of.

If I felt working in the parishes in Tanzania was very fulfilling and leaving them was not the best thing in my life, then I guess there is more to experience in religious life in Holy Cross. Our spiritually rich Constitutions teach us, "Similarly Peter became the Lord's true and reliable disciple not during the days he followed in Galilee but after he disowned his Lord and wept and was given the opportunity not to become as he once was but to serve as he never had served" (6:78).

Fr. David Eliaona, C.S.C., is a Holy Cross priest from the District of East Africa, which is a mission of the United States Province. He was ordained to the priesthood on January 26, 2008. After having spent the first years of his priesthood in our parishes in Tanzania, Fr. David came to the University of Notre Dame to work on a Master of Theological Studies (MTS) in the area of Systematic Theology. He hopes to use his studies to teach in the future. Fr. David is one of over a dozen Holy Cross religious in the United States Province, including several from East Africa, who are pursuing advanced degrees to better serve as educators in the faith. Hear from some of the other Holy Cross religious in advanced studies.