Bringing Hope in the Mountains

Bringing Hope in the Mountains

June 23 began like most Saturdays at the Novitiate: Mass and Holy Hour in the morning, an hour of chores following that, and then a free afternoon to hang out in downtown Colorado Springs. When one of my fellow novices burst into the house and announced that there was smoke behind our property, all that changed. 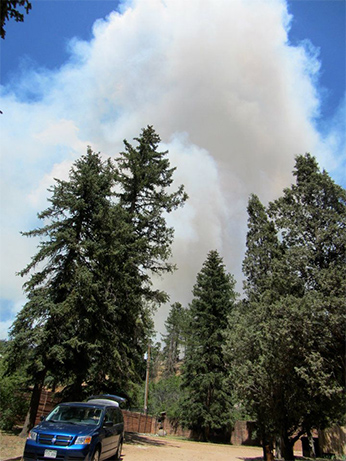 My initial reaction was disbelief, but when I rushed out to join my brothers, there it was: a plume of smoke a mile from where we stood – smoke that seemed to grow higher and darker by the second. Within the next two hours, the seven novices and three staff members quickly packed overnight bags, removed the Blessed Sacrament from the house chapel, and grabbed important personal belongings. We then headed down the mountain to the local Holy Cross rectory, where we were graciously hosted by Fr. Bob Epping, C.S.C., and Fr. Vince Kuna, C.S.C.

The eight days we were evacuated from the Waldo Canyon Wildfire could have easily derailed our common prayer, our community life and our ministry – major formation pillars which we had spent the previous 11 months learning to live and love. Those eight days, however, turned out to be one of the most powerful experiences of the entire year for us.

After accepting that we would be evacuated for more than a day or two, we immediately began providing much-needed volunteer help at the Colorado Springs Catholic Charities to help alleviate the unexpected burdens of evacuation shelters and increased donations. During those long and often overwhelming days, I realized that all of us were acting as "men with hope to bring" in a very real way. 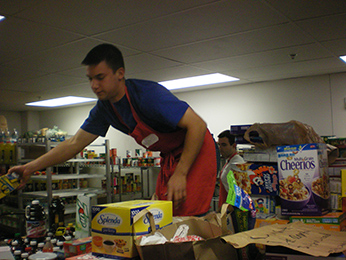 Our Constitutions tell us, "To try to rally those who have despaired, to stand by the side of misery we cannot relieve … our ministry will hint to us of Jesus' suffering for us. To spend ourselves and be spent for the needs of neighbors; to be available and cheerful as a friend in Holy Cross and to give witness while others hesitate; to stand by duty when it has become all burden and no delight … can draw us nearer to Calvary" (8:115-6).

Our charism thus charges us with bringing the joy and consolation of Christ to people who bear heavy crosses. This holds true whether we listen to a student talk about difficult family issues, speak with someone in hospice care, or comfort a family whose house was just burned to the ground.

In every ministry, it will often seem much easier for us to sit around and worry about what we want to accomplish rather that focus on what we can accomplish. None of us had any illusions about our ability to help extinguish an 18,000-acre wildfire; however, we quickly began work at Catholic Charities and a major evacuation shelter because that was where our ministry capacities were needed most.

When St. Paul writes, "I can do all things through Christ Who strengthens me" (Philippians 4:13), we should realize that he is not necessarily referring only to Herculean efforts, but also to seemingly insignificant tasks that seem like a mere drop in the proverbial bucket. Our pride often interferes with our willingness to give ourselves over to Christ, so a humble task like serving food at a shelter may – for some people – require just as much God-given grace as preaching to thousands of parishioners. As men of Holy Cross who live in vowed obedience to the will of God and our superiors, we learn this deep humility through trusting God and constantly conforming ourselves to the example of Christ as the perfectly poor, chaste and obedient servant. 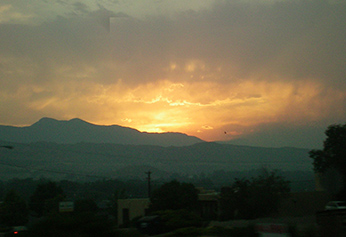 All followers of Christ will encounter situations which they can only surpass through the grace of God; thus, discerning God's will and having the humility to obey it is a necessity for all vocations, lay and religious alike. As we pray for the grace to hear God's voice and the fortitude to follow Him joyfully and unreservedly, let us reflect upon the words of our founder, Blessed Basil Moreau: "There is one condition which is essential for the future of our Congregation, a condition without which even Providence will not act. This condition is your own generous cooperation and faithful correspondence with the grace of vocation … this is the spirit we should have in the work of God, for we are only too fortunate to have been chosen as His instruments."

Mr. Michael Palmer, C.S.C. is in his first year of temporary vows as a seminarian at Moreau Seminary. He and other seminarians at Moreau post twice each month for the Spes Unica Blog, sharing on their life and formation at Moreau. Meet our other men in formation, and learn more about seminary life in Holy Cross, and specifically about the Postulant Program at Moreau Seminary, which constitutes the first year of religious and priestly formation in Holy Cross for college graduates.