Christ in the Vet

Christ in the Vet 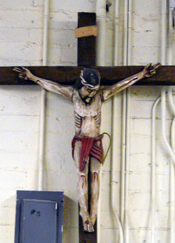 As we begin Holy week, many reflections come to heart and mind. We are blessed at André House to have some powerful Holy Week activities and prayers. Instead of writing about those again, I invite you to look at my blog from May 5, 2011. Our foot washing always touches my heart in a special way.

Reading through the account of the Passion according to St. Mark in preparation for Masses on Palm Sunday, two things struck me. First, I feel like we meditate well at Christmas about Jesus being homeless at his birth – Mary and Joseph told that there was no room at the inn. How often do I meditate on Jesus being homeless at death – nowhere to lay His head? He was completely dependent even for the tomb that He would borrow.

Secondly, reading Mark's Gospel, scholars have spoken of a "messianic secret." Although in this Gospel a few people indicate Jesus may be – or is – the Messiah before the Passion, they obviously do not understand what that means. Only at the very end, after the crucifixion, do you find the climatic statement of faith about Jesus as Son of God. Working at André House, I was struck by who makes the major statement of faith. It was not an apostle, or even a disciple. It was the centurion, the soldier. 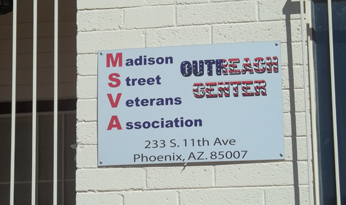 As one might expect, there are more than a fair share of soldiers (vets) who are homeless. One beautiful thing that has happened here in Phoenix is that a group of homeless vets organized themselves to reach out to other homeless vets. They call themselves the Madison Street Veterans Association and use the back of our Main Hospitality Center for their offices, paying utilities. They are signs of hope in a dark environment.

This week I have been especially blessed to have conversations with two vets in particular, the modern centurions here at André House pointing me to faith. 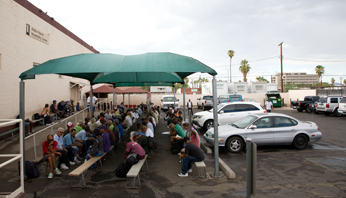 Tom started us in a humorous way. Still grieving the death of his wife a year ago, he has had a difficult last couple of weeks around her anniversary. He told me that while waiting in line for services at another agency, someone cut right in front of him. As this happened, he was talking to a sister who worked there, and she knew that the person cutting in front of him annoyed Tom. But he saw the look of concern on the sister's face and said, "Don't worry, sister, you know that line heading to hell … (pause) … he won't cut in that line." Evidently, the sister burst out laughing loudly, and the line cutter was so ashamed that he went to the back of the line. 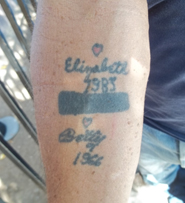 Before Tom came over to us, I had been talking with another vet, John. John was telling me about tattoos on his arm and the stories of the people involved – especially the tattoo with the names of both his daughter and his wife. His daughter shares a name with one of the staff members. Because the two women are roughly the same age, John told me that he thinks of our Core Staff member Elizabeth as his own daughter. He hopes to see his real daughter again soon, but for now he has internally adopted Elizabeth.

As we talked, Tom came and started talking about injustices. He tried to make a point about the difference in the ways that white collar and blue collar crimes are punished. Tom, while making his point said, "For example, I could be like one of those guys in the bank. Then I would say," and he turned to John, "'Give me $1,000.00.'"

John was not quite following all that was happening. So, in his simple way he just looked up from the ground and said, "I don't have $1,000.00. I don't have anything like that. But if you are cold tonight, I will give you the jacket off my back."

Tom looked at him and said, "I know you would. I appreciate it. You gave me this backpack when they stole my stuff." 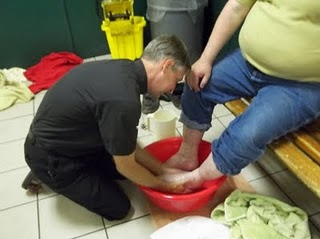 Personally, I tend to be a pacifist and abhor all war. But I also have learned not to confuse war with those who serve in the military. Just as in the story of the Passion in Mark's Gospel, so we sometimes find it happens here at André House. In Mark's Gospel the soldier makes the most drastic and cogent statement of faith, "Truly this man was the Son of God." Here at André House I have seen centurions making statements of faith – such as the existence of the Madison Street Vets. And, just as I have spoken with some of our men and women who have been beaten and broken by the cross of war and military service, I am blessed to hear stories of faith.

Beyond that, I have had moments like today – moments in which I not only see and hear statements of faith, but I have seen the face of Christ.