Forever. A word that I typically only think of in one of three specific contexts. First, sappy love songs in which the singer is obviously far too optimistic about a new, overly-simplified relationship. Second, the last word in the overused 2000’s acronym BFF. And third, in the movie “The Sandlot” where Squints is sure to enunciate the significance of eternity. For-ev-ver. All three are very distant from reality, and even more distant from my own lips.

This past weekend, the Moreau Seminary community celebrated the perpetual vows of 5 of our seminarians. To see men, all in their late twenties or early thirties, say the word forever--a word I never expect to have any bearing on actual reality--with the deepest sincerity and prayerful commitment hits you straight in the heart. As each of them took their turn to profess their vows, I couldn’t help but cycle through conflicting emotions. 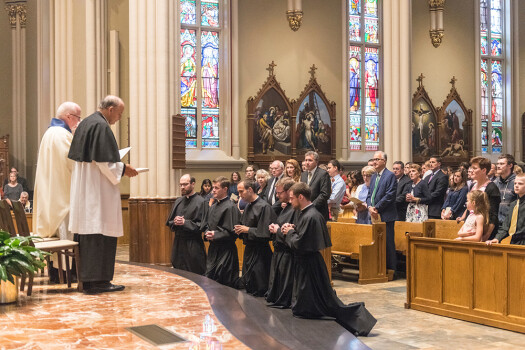 “Therefore I make to God forever...”

Forever is a really long time, how can they be so sure?

“...the vows of chastity, poverty, and obedience…”

Can they even be sure at all? Is that even possible?

“...according to the Constitutions of the Congregation of Holy Cross...”

Do they know that they said forever? Like no joke, forever.

“May the God who allows and invites me to make this commitment strengthen and protect me to be faithful to it.”

Each time the vows were professed I found myself skeptical at the possibility of forever, knowing my own human weakness and how often I fail to live up to commitments I make for a week or even a day. I would find my skepticism turn into jealousy: jealousy of the resolve each had, or maybe more accurately, embarrassment at the resolve I lacked. But as I heard the vows again and again, I was slowly reminded of how this is all possible, and the confusion and jealousy were melted away by awe. Only through the invitation and Grace of God were these men able to be so bold, to use a word that our culture thinks to be but a joke. A word we casually throw around, knowing that no one really means it.

Well, sitting at that mass I was reminded that God means it. No joke.

When Jesus says in Matthew’s Gospel “And behold, I am with you always, until the end of the age,” He means forever. He literally means forever. 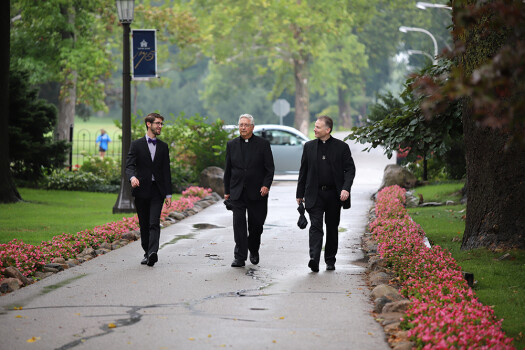 Being only 3 weeks into the Postulant Program with Holy Cross at Moreau Seminary, I’m thinking much more about what is on the schedule for tomorrow--prayer, meals, classes, plans with other guys in the house--rather than forever. But after witness the perpetual profession of vows I have been given new confidence and assurance that regardless where my discernment takes me, God’s forever is real. And by His grace, since He means it, someday I can really mean it too. I pray that through my formation and prayer that I someday will be ready to respond to God with my own forever. A word that comes to us from God, and which we can say with confidence through His help.

Richard Bevington is currently in the Postulant Program at Moreau Seminary. He is originally from Delmont, Pennsylvania. He attended both Notre Dame and the Harvard Graduate School of Education. Richard also enjoys talking to people about life, writing, playing four square, and making pancakes.

As the son of a college football coach and a former student worker in the Notre Dame football...

Friendship in Holy Cross: The Bond of the Holy Spirit

If anyone was to meet me for the first time, they would probably learn two things very quickly...

During my novitiate year in the Congregation of Holy Cross, I had the opportunity to take my...