Fr. Tyson honored by Notre Dame and University of Portland

Fr. Tyson honored by Notre Dame and University of Portland 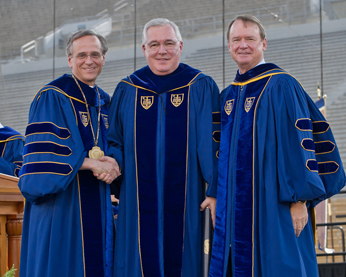 At Notre Dame, on May 20, at the University's 167th Commencement Exercises, Fr. Tyson received an honorary Doctor of Laws. He was also elected a Trustee Emeritus by the University's Board of Trustees. 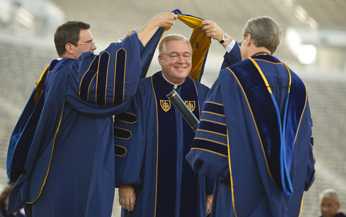 The citation for his Doctor of Laws, honoris causa, calls Fr. Tyson "a true son of Notre Dame from his earliest days as an undergraduate student and seminarian through his Ordination as a Holy Cross priest, work as an administrator, and his nineteen years of service as a University Fellow and Trustee. As President of the University of Portland for thirteen years, he oversaw a major expansion of its campus, a tripling of its endowment, and a conspicuous improvement of its already sterling reputation. As Provincial Superior, he played a crucial role last year in the historic union of the former Indiana and Eastern Provinces creating the new United States Province of Priests and Brothers of the Congregation of Holy Cross, whose ministries now include four institutions of higher education, and numerous parishes and ministries in this country, Mexico, Chile, East Africa and Peru."

Two weeks prior, on May 6, at the University of Portland's 111th Commencement Exercises, Fr. Tyson was awarded the Christus Magister Medal, which is the University's highest honor. The medal was first presented in 1995 and it is bestowed on "someone whose life, work, and creative zest have gracefully and powerfully encapsulated the three central tenets of the University's mission: teaching, faith, and service." 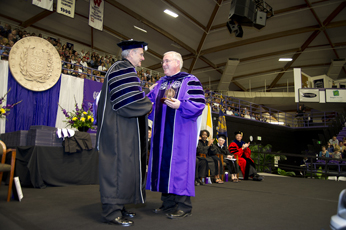 In announcing Fr. Tyson as the recipient, the University said, "Tyson is concluding his tenure as provincial of the Congregation of Holy Cross's United States Province in the summer of 2012.He was the University of Portland's 18th president, from 1990 to 2003, before being elected leader of what was then the Congregation's Indiana Province. During his tenure as provincial he has supervised the reorganization of his order's life in America, the most successful fundraising efforts in the order's history, and a highly successful vocational recruitment effort of Catholic priests and brothers. He has traveled worldwide to witness the Congregation's hard work in schools, orphanages, and parishes in Africa, Asia, Australia, Europe, and the Americas.

"During his tenure on The Bluff, he directed the University's first comprehensive capital campaign, a surge in applications and retention, and several new construction and renovation projects. He served for years at the University of Notre Dame, his alma mater, as student affairs vice president; among his many volunteer duties today are memberships on the trustee boards at Notre Dame and Portland."