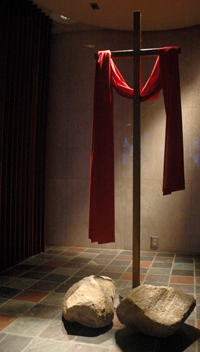 Entering into the second week of Lent, we have already had some powerful experiences here at André House. Last week, the first week of Lent, we had the blessing of a group of Spring Break students here from St. Anselm College. Each evening after dinner they drove back to the place they were staying and spent about an hour reflecting together. Twice I had the privilege of reflecting with them.

Their last day here, they traveled to White Tanks cemetery to celebrate the funerals of 11 people. White Tanks is the cemetery owned by the county where they bury the people whose bodies have not been claimed by anyone. For various reasons no family or friends have claimed them.

That evening, we reflected on their experience of going to the cemetery and praying the funeral prayers for 11 people. Each person, all 11 of them, had his or her own funeral ceremony of about ten minutes at the gravesite before the casket was lowered. The last person they buried was an infant named Madison.

Burying all of these people touched their hearts. We were moved especially by the experience of burying a baby. How can it happen that no one claims the baby? How do we make sense of all of this – a life so young and so innocent lost? How can God let this happen?

For me, personally, this raised the question of our image of God, especially God the Father. Do we believe in a God who is all-mighty and all-powerful? Absolutely. The problem that I have with most images I have seen of God the Father is that most often we see a representation of a stoic figure.

Maybe I am looking in the wrong places – or maybe I am not noticing the nuances that artists try to include in images of God the Father in which the first person of the Trinity is depicted in human form – but most often I see and hear God the Father depicted as a king or some all-knowing, almighty, being. Most often I see and hear depicted an image of the Father devoid of emotion. The Father is in heaven up there, with a holy name whose kingdom we want to come. We see and feel emotion in God the Son, Jesus – such as images of Jesus laughing, crying, or looking at us with compassion. But I rarely hear the same with God the Father.

This Lent I also spent time and reflected with one of our guests living at our transitional house. Right now he is experiencing extreme anguish. Last week his pregnant girlfriend went into the doctor to have tests done to find out the sex of their baby. Hours later she was in a car accident, and died during the night. Our guest was completely torn up, as you might expect. The pain and sorrow of losing both her and his unborn child overwhelmed him. He grieved as one losing his beloved. He also grieved as a father losing his child.

How does one make sense of this pain and anguish? How does this fit with an image of a God of love? Call it Divine Providence, but I found solace in the first reading at Mass last Sunday, the story of Abraham sacrificing his son Isaac. As I prayed with this Scripture, I saw that if I honestly can see Abraham struggling with the decision to sacrifice his son Isaac – step by step struggling with whether he should do this or not, and feeling how painful each step must have been for him all the way up the mountain – can I also imagine God the Father struggling and in pain as His Son, Jesus, makes His way to Calvary?

I do not believe in a stoic member of the Trinity. I don't think too many people believe in a stoic second member of the Trinity, God the Son. The Gospels recount many stories expressing God the Son's emotions. But I also believe in God the Father having emotion. If not, God the Father cannot be a God of love – love, too, is an emotion. I believe in a God whose heart breaks for us. God definitely rejoices with us when something good happens. But, on the flip side, when something terrible or tragic happens, I believe that God's heart breaks first, even before ours.

We grieved this week at André House. Grieved the 11 people buried at White Tanks. Grieved the two people killed in the car accident. 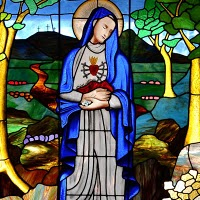 But we did not only grieve. This week I had the blessing of meditating on the sorrows of Mary, our Lady of Sorrows. If we can feel compassion for her as her heart was pierced watching her beloved son carry his cross to Calvary, I feel God invites us to also meditate on the Father's love. How much did God the Father's heart break as Christ carried His cross? How much does God – Father, Son, and Holy Spirit – love us if all 3 persons of the Trinity suffered for us?

I also meditated on the Constitutions of Holy Cross that remind us, "We do not grieve as men without hope, for Christ the Lord has risen to die no more. He has taken us into the mystery and the grace of this life that springs up from death. . . It remains for us to find how even the cross can be borne as gift" (8:118).

The students from St. Anselm saw the gift in being able to pray for people who others may have forgotten but who are not forgotten by God – and now not forgotten by us. We saw the hint of resurrection even in a place apparently so desolate.

As I write this, we still wait to see where the signs of resurrection may come for the guest who lost his loved ones (girlfriend and child) in the car accident. Both he and her family still remain in a period like Mary and the disciples did that first Holy Saturday, not knowing what would happen next. So my prayers are with them, and with all in a similar situation. As we continue to make our way through Lent, we pray that this holy season lead to a Blessed Easter and experiences of resurrection for all.