This week our blog posts will focus on our mission work in México. In order to understand our ministry there today, we first need to look back to the beginning of our presence in México. In today's post, Fr. Pete Logsdon, C.S.C., who served in our mission there for over two decades, chronicles the history of Holy Cross in México. 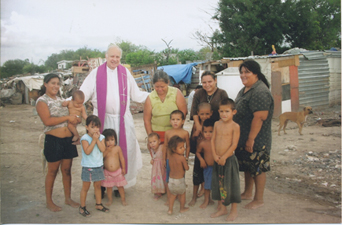 Ever since the day that members of the Congregation of Holy Cross arrived in Austin, Texas, in 1874, Holy Cross priests, brothers and sisters evangelized throughout the whole territory of Central Texas from San Marcos (south of Austin) all the way to Waco (north of Austin). Much of that ministry was carried out using the Spanish language. For example in 1907, Father Patrick O'Reilly, C.S.C., became the founding pastor of Our Lady of Guadalupe Parish in Austin, the first parish in Central Texas for Spanish-speaking Catholics. 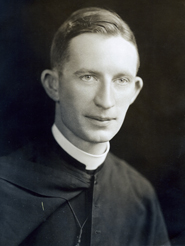 In the 1930's four Spanish-speaking Holy Cross priests, Fathers Frederick Schmidt, C.S.C., Thomas Culhane, C.S.C., Alfred Mendez, C.S.C., and Joseph Houser, C.S.C., were assigned to Central Texas. They formed Catholic Communities which soon became parishes in which Spanish was the primary language. It was not until the 1970's that Holy Cross expanded its ministry into México.

In May of 1972 at the age of 65, Father Frederick Schmidt, C.S.C. requested a sabbatical. After 35 years of work with Mexican Americans in Georgetown, Killeen, Copperas Cove and Round Rock in Texas, Fr. Schmidt desired to spend some time in México. What the Provincial at the time, Father Christopher O'Toole, C.S.C., didn't know was that he was looking for a parish in México that had no priest. He soon found one in the mountains of San Luis Potosí and received permission to spend his sabbatical year there.

As his 'working sabbatical' was drawing to a close, he called Fr. O'Toole and pleaded with him to remain. He described how the people had waited for him for hours when he first arrived and how the children greeted him with flowers and put on a magnificent fiesta. Every day the people would tell him how important it was for him to stay with them. They desperately needed a priest in their town! 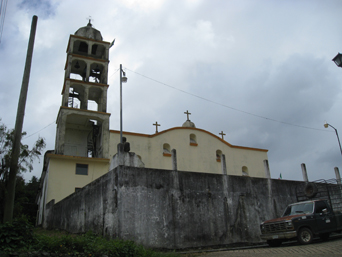 After contemplating Fr. Schmidt's request, Fr. O'Toole brought the matter to his Provincial Council and it was agreed that Fr. Schmidt could stay in Ahuacatlán. He was pastor there for the next 25 years and pastor emeritus for five more! During that time, Fr. Schmidt was also chaplain to the Dominican Sisters in the neighboring town of Xilitla.

He founded a group of Franciscans' Recollect in his parish where, with some help from benefactors in the United States, he built a beautiful convent that would hold 40 sisters. Soon the convent was full. Fr. Schmidt died in 2003 at the convent and was buried in the crypt of the convent chapel.

During those years, many Holy Cross religious visited Fr. Schmidt at his parish in México and some, like Father Fred Underwood, C.S.C., and later Fr. John Korscmar, C.S.C., took groups of young people to learn about the culture and help Fr. Schmidt for some weeks in the summers.

By mid-1980, members of the Southern Province (which today is a part of the United States Province) were aware that a whole new wave of immigrants was coming from México into Texas and needed to be served in a better way. This begged the question, "How could the Southern Province do better?" 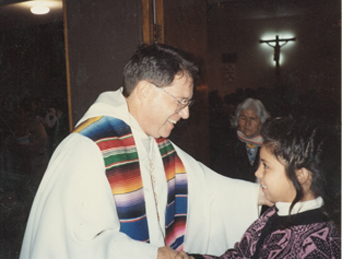 Father Jack Keefe, C.S.C., a missionary in Uganda for twenty years and now pastor of San Francisco Parish in Austin, had an idea. He suggested that the Southern Province investigate the possibility of taking a second parish in México, one closer to Texas. His reasoning was that Holy Cross priests, brothers, sisters and seminarians could learn first-hand about the culture of México and also learn the Spanish language. In addition, Holy Cross could help the Church in México where the ratio was more than 5,000 Catholics for every priest working there.

I was the Provincial Superior at the time, and with the consent of my Council, I gave tentative approval for the project and in December of 1986 Fr. Keefe, Fr. Edward Kaufman, C.S.C., and Fr. Leonard Collins, C.S.C., met with Archbishop Adolfo Suárez Rivera at the chancery in Monterrey, México. The Archbishop welcomed the Holy Cross priests, noting that he himself had studied at the Universidad Católica de Chile where Father Marcos McGrath, C.S.C, (later Archbishop of Panama) was rector. Later that same day, the Dean of the municipality of Guadalupe took the Holy Cross priests on a tour of the area.

A decision was made to staff Santo Tomás Moro Parish, which was in a poor working class neighborhood in Guadalupe, east of the city of Monterrey. Santo Tomás had a main church and two chapels serving 25,000 Catholics. Neither church had a full time priest. Also, Santo Tomás had a very poor area of squatters who were living near the city garbage dump. People lived in houses of cardboard with a little bit of tin on their roofs. 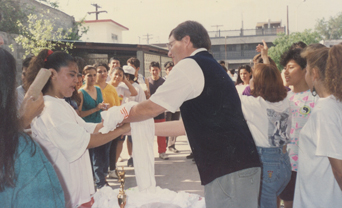 On September 9, 1987 Fr. Keefe was officially installed as pastor and Fr. Kaufman as associate pastor. The people were so happy because, for the first time in over a year, they had a full-time pastor, an associate pastor and a new religious congregation at their parish. A few years later, the Holy Cross Sisters arrived to minister in the parish, completing the Holy Cross Family.

From 1987 to 1996 the parish grew rapidly. Fr. Keefe created five new chapels around the parish including one called "Santa Cruz", which was in the poorest area. Fr. Keefe tells the story that he once proposed that the name be changed to a Saint's name, but the people resisted. "We are part of the Congregation of Santa Cruz," they said, "and that is our name."

By 1996, Santo Tomás Moro parish had grown to 60,000 parishioners and a decision was made to ask the Archdiocese to divide the parish. That is when I became pastor of the newer and poorer parish, Nuestra Madre Santísima de La Luz Parish. 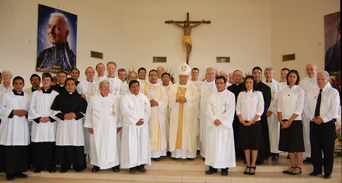 The Holy Cross Formation program, which began in 1993 under the direction of Father Daniel Panchot, C.S.C., and later Father Leonard Collins, C.S.C., was also growing. In 2007, Father Thomas Zurcher, C.S.C., arrived to lead the formation program and by 2010, three young Mexicans had been ordained for Holy Cross. That same year, Holy Cross took responsibility for San José Parish in Taman, San Luis Potosí, very near the first Holy Cross Parish in Ahuacatlán.

By 2011, La Luz Parish had grown to 45,000 Catholics and Father John Herman, C.S.C., was appointed pastor. Today there is a main church and four chapels in the parish and it is still growing rapidly.