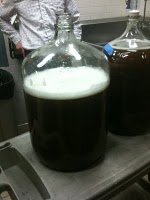 For all those whose curiosity is piqued by the title of this month's offering from Fr. Peter Walsh, C.S.C., who works in campus ministry at Yale University, you will not want to miss this post. Beer brewing a ministry? Read on to find out …
I would like a great lake of beer For the King of Kings, I would like to be watching Heaven's family Drinking it through all eternity. --St. Brigid (attributed)

Students come up with great ideas, and I've learned over the past few years to go with their intuition. I have to admit, I was a bit skeptical at first when a grad student suggested that we brew our own beer. I didn't know much about the process and frankly don't have the best lab skills. I did know that many monasteries brew their own beer for their own use and for sale and that there was some connection between Catholic culture and beer brewing. One student of the history of art reminded me that "the image of the jolly friar is almost synonymous with a frosty stein of golden brew." What wine making and olive oil production is for Mediterranean Catholics, beer brewing is for those born north of the Alps. So I gave the go ahead, crossed my fingers, and sent the grad students off to research brewing techniques and monastic practices. Did you know that there is an official prayer in the old Rituale Romanum for the blessing of beer during the brewing process? 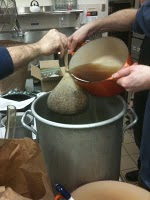 That was three years ago. Since then at the beginning of Lent, we have gathered in our kitchen to steep a bag of grains in water (mashing), strain out the liquid (wort), add more sugars and hops, boil the wort to remove any natural bacteria, pour the wort into a sterilized container, pour in (pitch) the yeast and cover with an airlock that allows the CO2 produced to escape and prevents airborne bacteria from entering the liquid and spoiling the taste. Just after pitching, we pray the blessing from the ritual as monks did (and presumably still do) for centuries:

V. Our help is in the name of the Lord.

R. Who made heaven and earth.

V. The Lord be with you.

R. And with thy spirit.

Bless, + O Lord, this creature beer, which thou hast deigned to produce from the fat of grain: that it may be a salutary remedy to the human race, and grant through the invocation of thy holy name; that, whoever shall drink it, may gain health in body and peace in soul. Through Christ our Lord.

And it is sprinkled with holy water.

The scientists in the group--the majority of participating students--insist that I use sterilized holy water for the sprinkling.

Brewing is a three part process. We transfer the vigorously fermenting wort to clean containers after a week. Some weeks later, we mix in a bit more sugar for the yeast to enjoy and then bottle it, allowing for carbonation to occur. Each time, we pray God's blessing as nature does its work. There is something very Lenten about this annual program, which disengages our consumption from consumerism and reconnects us to a Catholic tradition that focuses on the cooperation of God's creatures in the transformation of simple grains and water into a healthful beverage. 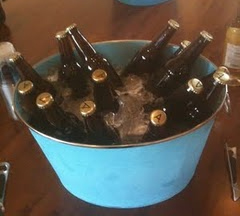 As a celebration of Easter, we serve the beer at our spring dinner, which honors those graduating from their graduate and professional programs at Yale. Last week, we served our home made ale and porter to thirsty grads, that they may gain "health in body and peace in soul." St. Brigid of Ireland is remembered as envisioning heaven as a family gathered around a lake of beer with the King of Kings, an image that amuses as much as it sustains us.