When I tell my US friends that I live in Perú, most of them will quickly ask if I had seen Machu Picchu. Now I can say I have! In February, two of us Holy Cross priests left a very warm Lima to arrive at a cool and rainy Cusco, on our way to the location that was recently voted one of the seven new wonders of the world. What an incredible place!

Having survived 25 hairpin turns climbing from Aguas Calientes to Machu Picchu—fortunately the downpour and thick clouds didn't allow us to see much of the abyss just beyond the bus's fogged windows—we stood under cover waiting for the man who would give us our tour. 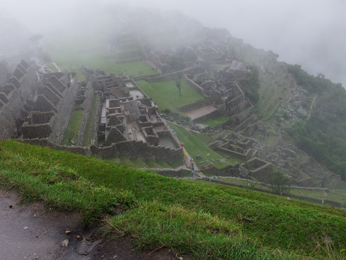 At each panoramic look-out along the way our guide was very apologetic about all that we could NOT see before giving his explanation of what we would have seen. At the third stop, just as we began to think it was unfortunate that we had come 800 miles from Lima to see nothing but clouds in our face and the muddy rocks beneath our soaked sneakers, something amazing happened. Our guide's description of the yet unseen was interrupted by the increasing volume of the ooh's and aah's of those of us who could see for the first time the awaited vision that he could not yet see behind him. The clouds had lifted like sheets being pulled off a room full of antiquities. It was breath-taking to see the green and rocky complex below suddenly uncovered and beginning to shine in all its splendor. 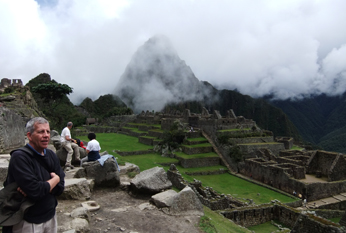 Our experience may have been similar to the first time Yale University explorer Hiram Bingham saw this hidden bit of the Incan Empire a century ago. One difference, however, is that the time it took for the clouds to lift and reveal the scene was a split second in comparison to what it took for crews of workers to uncover the vegetation that had grown over it during more than three and a half centuries since the Incans suddenly abandoned the citadel early in the 16th century at the approach of the Spanish conquistadores.

There's a whole controversy over Machu Picchu that's been brewing for the last century, and a book published last year—one hundred years after Bingham discovered the site and made it known to the world—sums it up in two questions: who discovered Machu Picchu and who owns it. 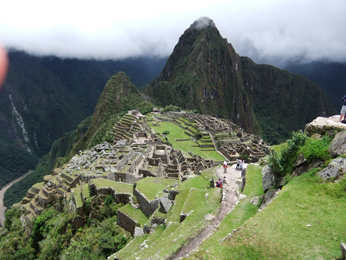 After giving those questions their due, the authors bring a nice insight to the discussion: possessing something has nothing to do with treasuring it. And then they add that the latter might be the better good. As legitimate as claims of discovery and ownership might be, God's creation (and human participation in it) is something to be received with awe, treasured and shared.

It seems to me that the best view of Machu Picchu is not the one you get when you turn a corner and there it is all of a sudden radiant under the sun, but rather as we saw it that day. Our arrival didn't change the fact that this world wonder had been there without us for more than five centuries and has remained all that time a mystery to be revealed. As much as we strained to see it through the clouds, we couldn't make it appear. But to our amazement it simply just appeared; and we were in awe!

The Gospel account of the rich young man suggests that letting go of possessing leads to discovering treasures much greater. Our visit to the Peruvian icon was a lesson for me about how we stand before God's creation – as before a mystery to be revealed. We strain to possess it, but when we finally let it possess us, it leaves us speechless and it becomes a treasure to be revered and shared.

Fr. Don Fetters, C.S.C., is a member of the District of Perú, one of several foreign missions overseen by the United States Province. He is a monthly contributor to the Spes Unica blog reflecting on the work of Holy Cross in the missions. Learn more about the missionary work of Holy Cross priests and brothers to extend the Good News of Jesus Christ across "borders of every sort," including Perú.