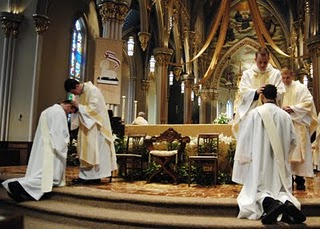 Although the coverage of the Royal Wedding may be winding down, we are still going strong on our exclusive coverage of Ordination Weekend. (We will have some pictures for you tomorrow!) And if you do not know what ordinations and what exclusive coverage we are talking about, we are not sure what ecclesial rock you have been living under because it is clearly not St. Peter's! So as we seek to put a hat (or a fascinator) on our Ordination coverage these next two days, we are going to hear first from Fr. Tom Bertone, Assistant Provincial of the Eastern Province of Priests and Brothers. Attending the ordination was an occasion for him to reflect on his now 30 years of ministry as a priest!

It is always a joyous occasion when one of our brothers in Holy Cross gets ordained! This past weekend, I had the pleasure of attending the ordinations of newly chrismed Fathers Paul Ybarra and John Britto Antony. I first met Paul when I gave a presentation at Holy Cross Novitiate in Cascade, when he was a novice. I met John more recently as he came to the from his province in to pursue ordination following his many years as a Holy Cross Brother. Both men have taken quite different journeys to get to this same point. Each has responded to their initial calls from God in unique ways. 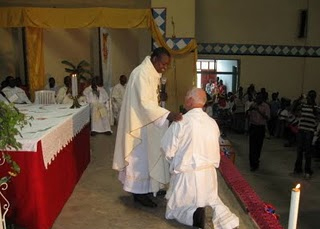 Every time I attend an ordination, I can't help but think of my own ordination 30 years ago. I remember my own journey and my initial excitement at "finally" being able to preside at Eucharist and be a minister of the other sacraments. I think of how my journey has continued since my ordination, with its ups and downs. I think of the variety of ministries in which I've found myself over the years, many of which I never imagined myself doing when I first responded to the call to the priesthood and religious life. I think of the wonderful people I've ministered with and to in various parishes, schools, and within the community. I think of the talents I've discovered within myself that I initially didn't know I had. At the same time, I recognize how the grace of God has helped me develop these talents and helped me when I was most unsure of myself.
In a way, I'm envious of Paul and John as they begin this exciting new phase of their lives as religious of Holy Cross. There is so much ahead to discover, so many ministerial experiences which will continue to shape them. But, like me, they will have their brothers in Holy Cross to help them become the priests they feel called to be. They will be encouraged as well as challenged. They will learn by example and by experience. And, no doubt, they will inspire older priests like me, to continue to grow in our own priesthood and religious life.