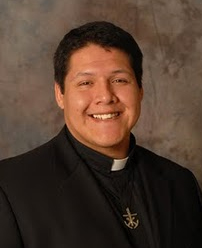 First it was the newly ordained Fr. John Britto, C.S.C. Now, it is Fr. Paul Ybarra, C.S.C.,'s turn. Moments ago in the Basilica of the Sacred Heart, Fr. Paul, with the Holy Chrism on his hands less than 24 hours old, preached the homily at his First Mass. Although Mass is still going, as with Fr. John's homily, we have for you as part of our exclusive Ordination Week coverage the text of his homily. In a few hours, on the ND Prayercast website, you will be able to watch Fr. Paul's first Mass as well. It is clear both of these men are going to be great priests for Holy Cross and for the Church!

When I was a child mercy was a game we played. We would grab someone by the hands, or we would put them in a head lock, or wrench their arms, or pull their hair, or twist their ears, till we caused them so much pain that they would scream "MERCY!" And then we, the powerful ones, usually laughing, would let go of the weak one, satisfied to know that we were powerful and that they were weak, that we were somehow merciful, and that we allowed them to go free. On this Divine Mercy Sunday, I must say that this child's game of "mercy" that some of you might know all too well is far away from the Divine Mercy we celebrate.

A noted bioethicist and author, Jacob Appel, wrote that "one of the glaring -- yet too often overlooked -- failings of U.S. culture is our obsession with justice and retribution." He goes on to say that "we claim to be 'The Land of the Free', yet we have lost sight of what it means to be imprisoned: denied liberty and access to one's family and friends, subjected to isolation and violence." The United States has less than 5% of the world's population and yet 23%of the world's prison population. It seems that we believe that people should get what they deserve. You commit the crime, now do the time. How might our society be different if we focused upon mercy and forgiveness? With a merciful and forgiving culture we might find ourselves less angry, less chaotic, and maybe less prone to criminal action. Dr. Appel suggests that the powerful should give mass clemency, that governors, and even the president himself, announce a year of freedom, open up the jails, and set prisoners free. Maybe we should go further than Dr. Appel, cancel the debts of the Third World and our working poor, and wipe the slate clean. That maybe, somehow, someway, the powerful will come to their senses, hear the cries of the captives and the poor for mercy, and let them go free, that their hearts aren't hard to this, that they can forgive. And as fantastic and wonderful as that might sound to some of you, or maybe terrifying and horrific to others, we have still not reached the fullness of meaning, the truth of Divine Mercy.

I think that we maybe operating under a fallacy. That mercy comes from the powerful to the weak, flows in one direction, and therefore we get this truth of Divine Mercy wrong. Yes, we have offended an All-powerful God with our sin, when we have hurt others and our very selves. We should get what we deserve; that forgiveness maybe understandably withheld. And as true as that is, our sin, and the distance it creates between us and God, and one another, the means of God's forgiveness remain a mystery, a contradiction, and a counter-sign, not only in the fact that it is given at all, but also in the means by which it is attained.

The mystery of which I speak is the Paschal mystery, the mystery of Divine Mercy. Jesus is given over to the powerful, innocent but condemned. He is shackled and crowned with thorns, his limbs wrenched and twisted, his whole body bloodied and whipped, and finally crucified. Jesus Christ on the cross does not yell "Mercy." He instead pleads forgiveness on behalf of those who persecute and torture him, that his love knows no bounds; that Christ would go so far as to save the powerful who know not what they do. 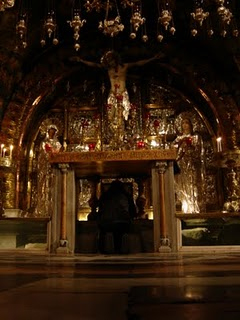 Divine Mercy is not attained from power, nor from simply being a victim, but from true mutual relationship, openness and compassion. It is not mediated from faraway, that our prayers cross the vast expanse of space and time to a God we cannot know and cannot understand. Divine Mercy is intimate, close, and truly present as Christ is in the Gospel and to us here today in the Holy Eucharist. As the Gospel for today suggests, it is a visible God, flesh and blood, truly present, vulnerable and newly resurrected and yet still scarred and broken, it is that God that comes to Thomas, who had doubted the resurrection and denied Christ with the other Apostles. Christ comes to a doubting Thomas, offers him to touch His wounds, to feel, to see, and to believe. In the encounter with the Wounded God, Thomas is the one who is healed and forgiven. It is Divine Mercy in flesh, vulnerable, and present that erases all denial and doubt, and to whom Thomas says the fullest and truest statement of Jesus Christ in the Gospels "My Lord, My God!" Clothed in flesh and blood, greatly desiring mutual relationship, Holy Communion, with us, the Christ seeks us out, finds us, so that we may encounter God's Divine Mercy.

Blessed John Paul the Second lived Divine Mercy, when he visited and forgave the man who attempted to kill him. He lived it when he went to the Wailing Wall, where so many of our Jewish brothers have cried for God's mercy, and prayed for forgiveness and mercy for the crimes of the Church and Christianity against the Jewish people. As he lay dying, his body weakened from Parkinson's, he did not beg for a mercy killing, for someone to take his life by artificial means, even though his pain and suffering were great. He trusted in God, and he served the Church to his last breath. 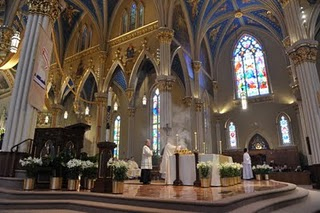 Today I celebrate my first Mass and my hope is that you see through me the Paschal Mystery, that mystery of divine mercy, not some far away hard to understand action, but something intimate and close, truly present here to you as Christ was to the Apostle Thomas. I hope to be weak and vulnerable like Christ, like Blessed John Paul the Second. I need to be weak and vulnerable so that I maybe like what I hold in my hands. If Christ had not emptied himself, given all, died for us, become broken for us, how else could he be shared? If we are not willing to forgive, and love, and serve others, as Christ did, how else would we know that God is with us? Divine Mercy is a paradox, a mystery, it begins with God and ends with God, and yet in between it all, in our human frailty, our vulnerability, and our compassion, Divine Mercy finds its perfection.