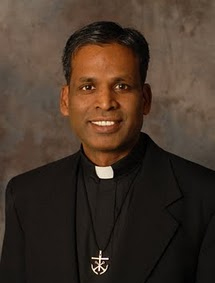 First out of the gate of our newly ordained in terms of presiding at Mass is Fr. John Britto, C.S.C. Moments ago in the Basilica of the Sacred Heart, Fr. John preached the homily at his First Mass. While Mass moves into the Liturgy of the Eucharist, we have for you as part of our exclusive Ordination Week coverage the prepared text of his homily. On the Catholic TV website, you can watch Fr. John's first Mass as well.

Today we are given yet another Johanine master piece from the "Gospel of encounters" – the description of the appearance of the risen Jesus to his disciples and in particular to Thomas. This magnificent and attention grabbing portrayal of the reaction, growth and confession of Thomas compels me to reflect with you on Thomas and on his pilgrimage of faith.

I don't know what you think of Thomas, but I find Thomas delightful and very charming. Many might have differing opinions regarding Thomas. Some might see in him a coward; others might see him primarily as a doubter. Yet others might find in him a saint worthy of emulation. Whatever it is, there is something fascinating about this person. I think there is something compelling and gripping by the fact that he didn't believe. Well, he is not the only one who was crippled by this peculiar bug. It is universal and ubiquitous. Everyone is bitten by this bug one day or the other. Doubt is deeply ingrained in our human nature.

Struggle to believe characterizes our lives so distinctly. Too often God seems to be remote and distant from our lives. It is hard to make sense of apparent death of goodness in the events of our day. Media screams of murder, violence and terrorism incessantly. All that we watch on TV screens only accentuate our reasons for disbelief. All the personal tragedies that I face in my life only shake and rock my faith. All the troubling events in the Middle East and the catastrophic events that engulfed millions of lives in Japan only seem to demand a lot more faith to believe in the resurrection. Despite our good intentions we find ourselves having a streak of incurable pessimism within us. How could I believe? How could anyone believe? 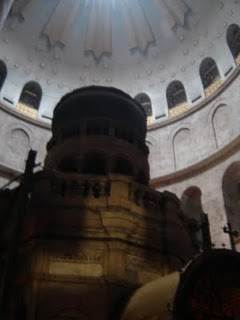 For some reason this "Doubting Thomas" becomes a favorite disciple for Mark Twain. He wrote "It seems to me that we owe that hard-headed-or sound-headed- witness something more than a slur." What do we owe this enigmatic apostle?

I see in Thomas a pilgrim of faith in progress. And I see three stages in his faith journey. In the first stage Thomas is a pilgrim who begins well when everything seems to go fine and according to expectations. When Jesus was around preaching, healing and performing miracles, he felt better to be in his company. He felt proud to belong to him. He had the gumption to say that he would go to any length to be with him. Isn't this a common experience in our lives too? When life is smooth, when there are no obstacles to our planned program of life, don't we find it easy to celebrate, rejoice and believe?

Thomas enters the second stage in his pilgrimage when he witnesses the arrest of Jesus. When he hears of the trial, torture and crucifixion of Jesus his entire dream edifice crumbles. He gives up when he is tormented by debilitating doubts. He gives up when the person in whom he trusted, when the person who was his everything seemingly did not live up to his expectations; when things did not go the way he had planned, when the crushing realities of life seemed unbearable to him he gives up. Like Thomas we too go through this struggle of disappointment when our plans go awry. Rather than being open to the plan God has for us we try to impose our petty little projects onto God and then recoil within and be depressed when they are not met. Psalms 127 says it beautifully thus: Unless the LORD builds the house, its builders labor in vain. Unless the LORD watches over the city, the watchmen stand guard in vain. When his expectations collapse Thomas goes away from the community of disciples to be isolated and to starve in his desolation. As I reflect on Thomas' struggles, I see that he is tossed between two kinds of doubts. One is a doubt that seeks for understanding, a doubt that quests for truth, a doubt that inquires into reality, a doubt that explores, a doubt that springs from productive and constructive intentions. This is a positive aspect of doubt. The second kind of doubt is that which is skeptical, that which is vicious, cynical, and corrosive; a doubt that has no hope for the future, a doubt that is self destructive. This is a negative aspect of doubt. Thomas passes through this negative, self defeating stage when he gives up hope in the person of Jesus, when he regrets the time wasted in his company. We do struggle with these doubts as does Thomas. Both these doubts are inevitable in our lives. But Thomas gives us a remarkable example of how to overcome such sinister moments. Thomas does not stay there. He moves on.

As he moves further Thomas embarks upon the third stage in his faith pilgrimage. It is then that he decides to go back to the company of his fellow disciples, still doubting but having hope, still hesitating but confident that something good will come out. Thomas makes an attempt to seek a solution. He moves from the grip of doubt that destroys to a doubt that builds, reconstructs, restores and reforms. He moves from being a loner to being a member of the community that too struggles but could stand together. The other disciples too perhaps go through the same struggle as Thomas but they decide to stick together and to seek in company with each other an answer to their doubts. Though afraid they did not cower or flinch in self defeating doubt. By coming back to his community, Thomas displays the necessary courage to begin anew.

Jesus precisely answers to Thomas in this state of seeking. Jesus continues to fulfill what he said in the gospel (Mt. 11:28) "Come to me, all who labor and are heavy laden, and I will give you rest." This is what our Risen Lord is calling each of us to do when we are broken and shattered. Jesus gives into the shattered Thomas' desire for physical proof and empirical evidence. Jesus does not rebuke or chide him rather methodically addresses his need. How appropriate that the Church has marked this Sunday as Mercy Sunday. Mercy of God outshines, overpowers even his divine justice and we see it from the time of the Fall of Adam and Eve, Abraham, Noah, David until it reaches the summit, in the crucifixion and resurrection of Jesus, his only son. This mercy is exemplified in today's gospel passage from John when the Risen Lord lays bare his wounds and invites Thomas to touch and feel and experience it. Jesus plucks at the heart-strings of Thomas. In the presence of this overpowering, overwhelming reality of the mercy of Christ, Thomas is enlightened; Thomas is made to see clearly through the fog of his doubts.

Upon seeing the risen Lord, upon finding the source of eternal life, his doubts vanish, his disbelief disappears, he surrenders. And in his moment of surrender he makes his most extraordinary confession which turns out to be the best of the declarations ever made in regard to Jesus. Once he surrenders he commits himself to a life of complete dedication, even to the extent of going beyond borders to a territory unknown to him, to fearlessly preach and to valiantly reach Christ, to the beautiful land of India whose witnesses we are. The many Indian priests, religious and friends that you see today present at this Basilica are a living proof of his zeal for the mission of Christ.

Thomas matures, grows, metamorphoses, passes from disbelief to belief, from fear to trust, from his isolated and fierce independence to staunch interdependence with those who believed. It was among them, gathered on the first day of the week that he could find, touch, and embrace the risen Lord. Are we not in the same situation like Thomas? Don't we find our faith journey threatened with debilitating doubts? Yes, indeed, everyone finds himself or herself there without exception. But what do we do then? Do we decide to stay there? Thomas bounced back instantly within days. Do we wish to move to the third stage in the pilgrimage when we could completely surrender to the Lord of the resurrection? Standing on the edge of belief and disbelief, dithering between fear and doubt, vacillating on the rim of choice and pro-life, wavering between commitment and waywardness, we find ourselves undecided at times, hesitant often to encounter the risen Lord who waits eagerly day by day for our decision. Thomas made the best use of the moment to utter the most unimaginable truth: "My Lord, My God."

Out of Thomas' doubt comes the most compelling and incontrovertible evidence of the resurrection, which is the hinge on which our entire claim rests. He became the first Apostles to profess his absolute belief in the divinity of the risen Lord. In confessing Jesus as "my Lord and my God" Thomas made the most profound declaration about the person of Christ – that he is truly God. This significant and uniquely insightful confession of faith affirms the bed rock of our claim that Jesus Christ is divine. Hence, Gregory the Great was prompted to say that: The disbelief of Thomas has benefitted the Church more than the belief of all other apostles combined. 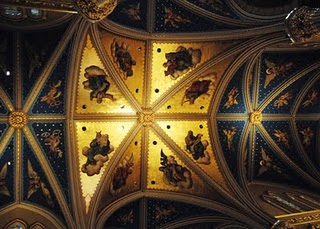 Yes, this Lord and God is the author of life, master of surprises, God of breakthroughs. Being rational, wanting empirical evidence and seeking for irrefutable proof are all fine. But how far can you go with it? The reality of the abundance of grace that our risen Lord offers is much larger, much wider than what you can comprehend by your questions, by your analysis, by your experimentations. The deepest truth about reality cannot be completely known no matter how much intellectually, technologically equipped you are. You cannot reduce everything of reality to your laboratory table to dissect and analyze.As we move on what do we take with us? There comes a moment in life when we are speechless, when we have to submit and surrender to this immense reality of the abundance and fullness of life in silence and begin to fall in love. Doubt cannot be a stopping-place or a hiding place. Our insistence on staying put might lead us to settle for something less. It should rather be a stepping stone to a mature, deeper and greater faith. Thomas allowed his doubts to awaken him to a much wider reality. Our Risen Lord extends an invitation to us through this Eucharistic banquet to renew our faith in him. The risen Lord invites us today to fall within the orbit of love, within the ring of fire, if you will. He is calling us to transcend and go beyond that level of inquiry, skepticism, rationality and empiricism and surrender. Faith is the power that affords us the distinct privilege and access to that larger reality called God. "Blessed are those who have not seen and have believed." And Alleluia will continue to be our song. Alleluia!