Our Lady of Holy Cross

Our Lady of Holy Cross 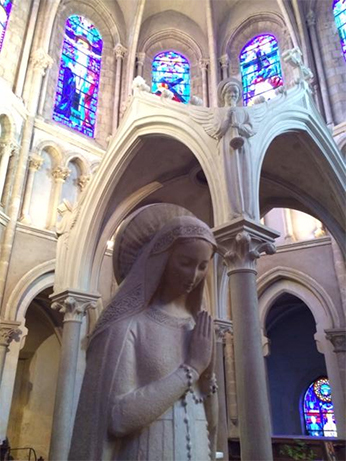 After celebrating Mass by the tomb of Blessed Basil Moreau, most of the congregation stayed for the Holy Hour in the Church of Notre-Dame de Sainte-Croix in Le Mans. Though it was a cold early winter morning a few days before Christmas (and churches in Europe aren't usually as well heated as in America!), the sunlight from the stained-glass windows and the beauty of the Church and what we were doing warmed the soul.

Fr. John DeRiso, C.S.C. was presiding. As the Rector of what is to be a Shrine in honor of Father Moreau in the lovely gothic church which our Founder built, Fr. John has been charged with development of the shrine as a place of pilgrimage and as a center of Holy Cross spirituality. As I was in France to work in our Family Rosary mission there, I was blessed to be able to spend some good time at Notre-Dame de Sainte-Croix and with Fr. John. 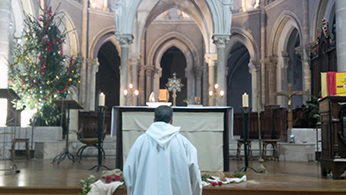 I was blessed to sit in meditation that hour before the Blessed Sacrament in that church which, since my first visit sixteen years ago, has meant so much to me. Somehow I seemed to be able to feel its history, which reflects much of the history not only of Holy Cross, but of our contemporary world. In the middle of it all remains the abiding presence and providential action of the God who was born to die for us and whose love comes to us through His Mother, who stood faithfully at His side at the Cross, for whom this church is named. 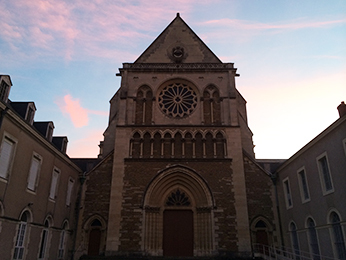 Building that church in the middle of the social, political and religious turmoil of mid-19th century France could itself not have happened without God's grace, and all that the new community went through during this time put Father Moreau through his own dark night of the soul. The recently completed church became part of a "spiritual crucifixion" for Father Moreau in the 1860's, until it was sold to the Jesuits in 1869. It continued to be drawn into the turmoil of its country as the French state took away the church and the adjacent Holy Cross School from the Jesuits when all religious orders were suppressed in 1903. The church complex became an army barracks. Finally the Congregation of Holy Cross was able to buy it back from the Army in 1937. 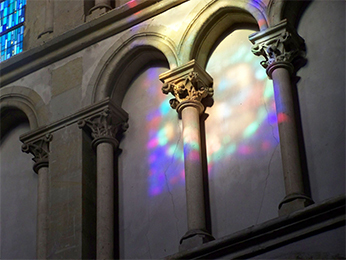 Notre-Dame de Saint-Croix has survived three wars. The Battle of Le Mans in January of 1871 was one of the final events of the Franco-Prussian War. The church was used as an army stable during the First World War and remained so until the Congregation bought it back. Still, the army barracks next door to the church had been taken over by the Germans, and Allied bombing before the Normandy Invasion in 1944 destroyed its stained-glass windows.

Throughout these more than 150 years, the church has been a home from which Our Lady of Sorrows has looked on and united herself in love with her Son, crucified in so many ways in the lives of her children suffering in our world. It is an iconic testimony of this motherly love, symbolically speaking the Lord's words, "I am with you", and His promise: "Behold, I make all things new." 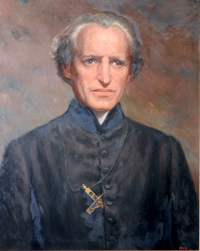 Did Father Moreau have some intuition of what would happen when he decided to build this church? France today very much needs places like Notre-Dame de Sainte-Croix to be beacons of the light of faith in a culture that is besieged by doubt, materialism and meaninglessness. Through the Shrine, Father Moreau and his spiritual family can continue to participate in the urgent work of the New Evangelization, from the very birthplace of Holy Cross. However, Fr. John DeRiso has no easy task. Let us all pray with him, through the Intercession of Our Lady of Sorrows and Blessed Basil Moreau, that God may bring this vision to fulfillment.

Fr. Jim Phalan, C.S.C., is the Director of Family Rosary International, which is a part of Holy Cross Family Ministries. HCFM was founded by Servant of God Patrick Peyton, a Holy Cross priest who had a special devotion to the Blessed Mother and preached that the "family that prays together, stays together." Fr. Phalan will be writing for the Spes Unica Blog each month to share with us the great work of Family Rosary International, yet Family Ministries is one of the creative ways that Holy Cross continues to reach across borders of every sort to spread hope. Learn more about the missionary work of Holy Cross.