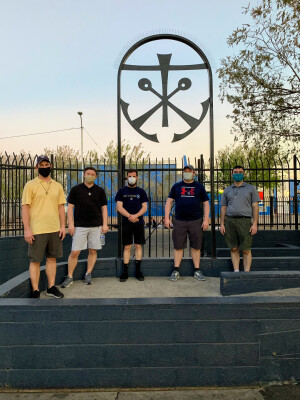 During the pandemic André House in Phoenix, Ariz., continues to minister poor and homeless in the area. Because of concern for their volunteers, they are only operating with a core community of holy cross religious.

Even though they have had to cut down on some of the services they usually offer, they are doing amazing work with such a small group of people. Two or three times a week they are ordering more than 600 pre-packaged meals from local restaurants so the other services can be staffed. This has the added bonus of helping local restaurants.

The U.S. Province sent a small cadre of young religious to provide support. Upon return, the religious headed back to their homes for a 14-day quarantine, and a group of eight young men in formation followed in their footsteps to assist and again return to quarantine. We appreciate the service of these men and the formation staff for organizing this.

Please enjoy the reflections and observations of our religious and men in formation in this and other blog posts to follow.

One of the amazing things that I experienced at André House was the overwhelming support of people from the community. Here, Fr. Dan Ponisciak, C.S.C., (the Director of André House) and I are packaging meals on Sunday night. Sunday night is typically goulash night, but recently, a patron known by the guests and staff as “the Chicken Man” would bring 400 pieces of fried chicken for dinner on Sunday nights. He had only missed one Sunday in recent memory because the pandemic had caused the store to be understaffed … incredible! The homemade goulash was delicious, but the guests were very excited to eat some good fried chicken as well.

As I was packaging these meals with Fr. Dan, I was blown away by all of the stories he told of people similar to “the Chicken Man,” who contributed in their own, quiet ways. Every person had a story or reason that they felt compelled to participate in the mission of André House; some of those reasons were known to the staff, and some of them were known only to God. We were just grateful for the generosity of so many, and thrilled to be serving some good fried chicken!

André House typically serves around 700 dinners a night. Because of the coronavirus and the need for social distancing, they had to close down their dining room and regular food service line. They did not miss a beat serving their guests meals, but instead of their normal service, they either purchased pre-made meals from local restaurants or prepared meals as normal and then packaged them for distribution from their loading dock.  Even though I was only there for 2 weeks, this seemed like the most drastic change for the guests and the staff – from eating and being served in a communal dining room and being able to linger in cool air, to receiving a to-go meal at the loading dock from people in masks and sterile plastic gloves. This changed the feel of food preparation and meal distribution to a more impersonal manner, but it also allowed for more safety precautions. Even with all of this, I was amazed at how well the core staff knew the guests and the ways in which a kind comment or a look in the eyes still made the guests feel known and loved by them.

“Our calling is to serve the Lord Jesus in mission not as independent individuals but in a brotherhood. Our community life refreshes the faith that makes our work a ministry and not just an employment; it fortifies us by the example and encouragement of our confreres; and it protects us from being overwhelmed or discouraged by our work.” (Constitution 4:33)

When Fr. Bill Lies, C.S.C., our Provincial, reached out to me about the possibility of going to Andre House, I was thrilled for the ask. I serve as a Rector at Notre Dame, but with no students on campus and no firm plans for what the close of the semester or beyond would look like, I was energized by the possibility of serving at a place where some extra hands were welcome and needed. The icing on the cake was finding out that there would be other CSCs in my formation group who would also be responding to the call. In Arizona, the six of us all lived in one of André House’s emergency houses. We prayed morning and evening prayer together, had Mass together on the day off, caught up on life in our apostolates and local communities and processed this experience together. This slice of the folks whom I spent time with at Moreau Seminary in formation would never have spent this time together except to respond to this call at André House. We felt deeply “Holy Cross” when we responded to the call, but even more deeply “Holy Cross” in that we were able to respond to the call as brothers in community.

Fr. Brogan Ryan, C.S.C., was born and raised in Columbus, Ohio, the sixth of eleven children with a twin brother. He is in his second year as Rector of Keough Hall. After graduating from Notre Dame with a degree in Accounting, he taught middle school Religion and Math in Montgomery, Alabama with the Alliance for Catholic Education. Following a quick detour into the world of public accounting, Fr. Brogan returned to South Bend to enter Moreau Seminary and formation with the Congregation of Holy Cross. He finished up his theology studies at Notre Dame in 2018 while serving as an Assistant Rector at Keough Hall. Fr. Brogan was ordained a priest in April 2019. He currently helps lead Notre Dame's RCIA process, working with folks who are interested in becoming Catholic.