The Host of the Mass

The Host of the Mass

This weekend I had the joy of traveling to the Chicago area to celebrate my nephew's First Holy Communion. Anticipating my visit with my sister and her family, I was excited to see them as well as to see my parents and others who would be there for the celebration. 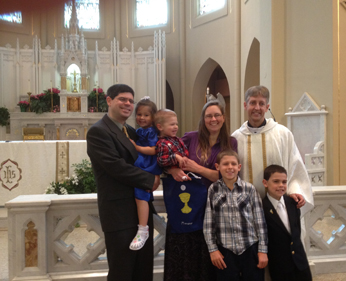 On the way there, I also spent time reflecting on how different the celebration of the Mass at André House is compared to the celebration of the Eucharist with all of the excited/nervous/fidgety/pious but distracted children who would receive the tremendous gift of the Body and Blood of Christ for the first time. I also started to think about the different things that have happened at Mass that were not covered in the seminary, not even in the class about how to celebrate Mass.

At André House, we celebrate Mass outside in our parking lot Monday through Thursday at 9:30 a.m., immediately after opening the gates at the Main Hospitality Center and settling the guests who come for either clothing, to do laundry, make a phone call, or to get a blanket. On the first Friday of the month and on holidays, we have Mass at our transitional houses outside before a potluck. Twice a year we have Mass inside our dining room. 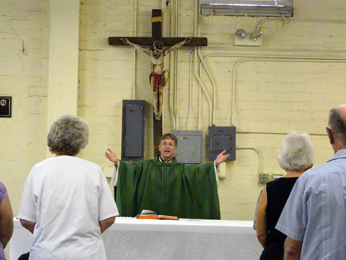 Some of the things that I have encountered at our André House Masses but were not discussed in class include:

Offerings. Sometimes more than bread and wine get offered at Mass. Several times we have had people leave something on our altar before or even during Mass (and not necessarily at the offertory time). One woman who we called "Rosary" would come almost daily and leave flowers on the altar with a small note. Often she would hand them to me after Mass and say, "Give these to Jesus." A couple of times on the way back from the Food Bank an hour before Mass we have seen her in different yards collecting her gifts for the Lord.

We have had several grapefruit offered, as well as someone who literally gave the shirt right off her back (as the rest of us gave thanks that she had something on underneath). She very ceremoniously made her offering in the middle of the intercessions. Fr. Duane Balcerski, C.S.C., was presiding at that Mass, and he did not skip a beat. He simply said, "We pray to the Lord," and we responded, "Lord hear our prayer." 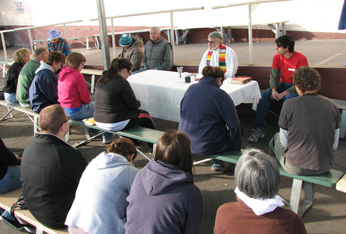 One day a man from India came with a donation before Mass for the soup line, but then decided to join us for prayer. We could tell this may be his first Mass, but he was quite respectful. Around the offertory time, he left the benches by the altar and went to his car. I thought he might have had to leave and so continued with Mass. Quickly I noticed he was preparing something in his car. Just about the sign of peace, he came over with "fresh" flower leis (and their accompanying fresh flies) that he proceeded to put around our necks.

At André House I have also learned that there are interruptions and there are interruptions. In many churches I have encountered people mimicking the hand gestures of the priest during Mass. This has a very different feel when the one mimicking is a child in a large congregation compared to an inebriated adult sitting in the bench directly across from you. Delayed responses of "Amen" no longer faze me.

Nor does it faze me as much when a guest who has been waiting for us to open starts to get unruly and lets his or her feelings known using the "vernacular." Suffice to say that people who have to be asked to leave usually do not say, "Oh, thank you for pointing out my errors." Even in the guests' casual conversation while waiting for Mass to finish so we can open the building one can hear a word beginning with "f." They use it even more when asked to leave. And we continue to pray on. 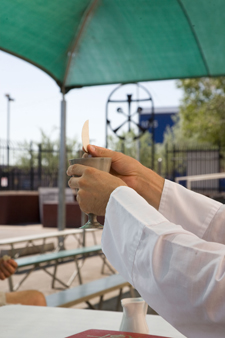 What have been the most distracting things, for me, during Mass? Three come to mind: 1) One person, who sat on the ramp into the building behind the altar, decided during the Eucharistic Prayer at the words "This is my Body," to shout: "That's not literal! That's not literal!" I had to ask him to let us pray without interjections.

2) During the sign of peace one of the guests decided to pick up the chalice, and it looked like he was about to drink from it. We asked him to wait to drink, but he decided to leave instead.

3) Trying to drink the Precious Blood at the sign of peace was better than the man who, also during the sign of peace on a different day, decided to pick up the chalice and start walking away. I assure you that it is most appropriate to stop Mass and shout, "Sir! The cup needs to stay here!" He stopped and quietly returned our chalice without spilling any of the Precious Blood. On both of those occasions we stopped the person very quickly as we take seriously the sacredness of the Eucharist.

In case you were wondering, no, there were no such distractions during my nephew's First Holy Communion. There was a nice offertory, good singing, and appropriate responses. We had a beautiful and wonderful celebration.

I also find the unmasked and very simple celebration of the Eucharist at André House very beautiful. 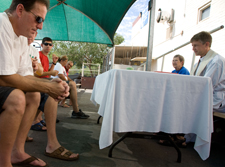 At the end of the day, it does not matter where you celebrate the Mass – in a gothic church (like my sister's parish), in a basilica or cathedral, or in a more simple setting such as a country chapel or the humble parking lot of André House. What makes the Mass beautiful is not the singing, the correct responses, the distractions or the lack of distractions. Good proclamation of the Word, full and active participation, well-chosen and prepared music all serve great functions to help raise our hearts minds and souls to God.

But the most important thing is what my nephew focused on this weekend – the host. At the Mass, Jesus is the host. He welcomes us, and even gives us the gift of prayer. As long as we focus on Him, and perhaps even re-capture the excitement of receiving Him as those children receiving First Holy Communion did on Saturday, then we will receive grace upon grace. That is literal … and amazing.