It was the third time we had ventured out of our cozy compound in Srimangal and we were still getting our feet underneath us. With a couple of days of teaching under our belt, we were ecstatic to venture out to new destinations outside of our familiar Parish grounds. Our plan was first to visit the beautiful Lawachara National Park, but, seeing that the Park was closed for the day, decided to visit the Marist Brothers that lived nearby.

Trudging through the uneven, mud-ridden side roads, we arrived at the Marist Brothers’ community. A large, pale blue rusted gate swung open as the guard on the opposite side waved us through. To our right, there stood a four-story building under construction with a light-skinned, seemingly elderly but truly invigorated Brother who greeted us as we all piled out of the car. “Brother Eugenio,” he introduced himself with a more-than-firm handshake. Brother Eugenio explained that he was originally from Spain but had worked in Africa a while and decided eventually to undertake the construction and management of the new High School being built on the community grounds: Saint Marcellin High School.  He explained that formal schooling is the first instance in which the children learn “how to turn on the light switch.” In the setting of oppressive British tea companies, it seemed reasonable that he was referring to the idea that the kids were tested to think for themselves for the first time in their lives in a school environment. That school would, in fact, challenge them to come out of their shell to learn about the world around them and then to perhaps keep this passion alight in their hearts from then on. However, Brother Eugenio meant this in the literal sense. The students just did not know how to turn on a light switch. 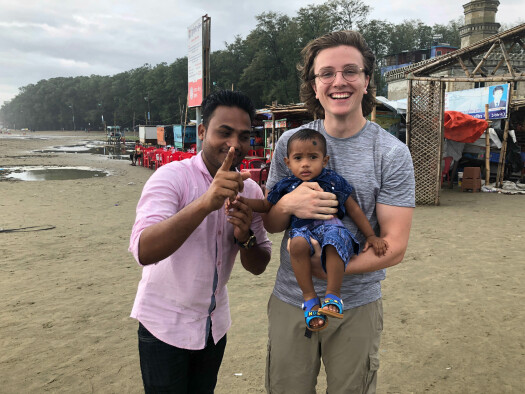 We then proceeded to visit a neighboring community of two or three families. Upon our arrival, all of the small children gathered around Chris and I and began lightly tugging on our arms.  They would clasp our forearms, and we would lift them by merely extending our arms horizontally. Their tiny selves giggled as they repeated a specific phrase after we would let them down, usually signifying they wanted to be lifted up again. Their laughter was pure as it filled my heart to the point of it breaking at the seams. In this same moment, a worried mother rushed up to Eugenio at this point and began motioning towards her child in a semi-frantic manner. Still giggling from earlier, the child runs over to his mother who motions at the child’s left eye.  Eugenio covered the boy’s right eye and asked him to follow his finger, but he quickly shook Eugenio off in fear. The Brother persisted, but the child recoiled once more. The child had lost sight in his left eye. After the pseudo-eye exam, the child ran directly back to Chris and me, wishing to be lifted up in the air once more.

This experience left me troubled because it was so incredibly real. It not only portrayed how bitterly unforgiving poverty can be, but it also illuminated the example of Brother Eugenio’s service to these people. His absolute devotion to their lives in the hope that they, because of his sacrifice, might have a chance at a better life one day is a constant example of how one can live in the footsteps of Christ. He doesn’t just lift them up temporarily as a part of a game. Instead, he picks these people up with both hands, placing them on his shoulders so that they might see the horizon and the future that awaits for them as Children of God. He lived among these people, not above.

Amid all of this suffering it is important to focus on the giggling (no, really). That yes, the Bangladeshi people in Srimangal may be awfully oppressed by the surrounding tea companies. Yes, they might not have an abundance of wealth or any fancy title, but they are joyful. Truly joyful. And where does this joy come from? Where else but their immense faith in Christ. Something that I, personally, take for granted on a campus such as Notre Dame. However, I offer the figure of Brother Eugenio as a foil to our daily lives. That where this short writing ends, a devotion begins to love and serve our fellow neighbor with the same joy that I have attempted to encapsulate in written words. Hello my name Is Benjamin Wainscott and I was born to James and Darla Wainscott on July 29, 1998 in Cincinnati, Ohio. I have two lovely younger sisters, Maria and Sarah, who are now making their way through their High School years. I belong to St. Gertrude Parish in Madeira, Ohio.

Growing up in Catholic schools for most of my life, the fire to be a servant for others was kindled early on. I found a profound joy and freedom in devoting the energies that would otherwise turn inward and focused on the needs of others. What I received I did not expect to receive because my only desire was to benefit those who go without on a day to day. But what I soon realized is that this is who we are called to be as Catholics. Joy-filled disciples of Christ who come to serve and not to be served by this world so that all may encounter the love of Jesus. My life is a story of coming home to this intimacy with Christ through giving my whole self and placing it on the altar. What I received is an overabundant joy that leaves me not only desiring more but desiring this same joy for those in whom I encounter.