You are Smart. You are Kind. You are Important.

You are Smart. You are Kind. You are Important.

“Oli munto murungi.” You are kind.

You may recognize this quote from the movie, The Help. You may be unfamiliar, however, with the language it is in, Rutooro. Rutooro is the dialect of the Ugandan region I lived in for two months last summer while I taught at the local high school. While there, I learned as much Rutooro as I could which allowed me to connect, not as much with adults, but with the village children.

The neighboring children were intrigued and frightened by me, the only white person they’d ever seen. To show them I wasn’t so different, even though I looked strange to them, I spoke what I could in Rutooro. Though they laughed and labeled me “the white-person” in the village, one girl seemed to like me, and every night when I went on a walk, I found her waiting for me on the road. Brenda, I learned, went to the local primary school, and lived a short walk from me. She became a part of my nightly routine, walking with her and using the new Rutooro I had learned each day. At one point I said, “Nyorleka muka yawe.” Show me your home. She took my hand and led me to a small hut, where I met her siblings, Joseph, Juliet, Bridget and Margaret, and Nicolas. A few days later, I met their mother, Rose, who graciously welcomed me into her home.

I started visiting Rose’s family every night, sitting with them as they taught me Rutooro and getting to know each other. I brought American candy for them to try, gave piggy back rides, and even brought nail polish which Rose surprisingly let me use on her toenails. I learned each child’s personalities and quirks, how shy and sensitive Brenda was, yet how she looked up to her oldest sister Margaret who went to school, helped raise her siblings, and took care of the house. I saw the liveliness of Joseph and Juliet, who relentlessly chattered even though they knew I could not always understand. Finally, I witnessed the incredible strength of Rose as she brought together a beautiful home for her family, working tirelessly to send four of her six children to school.

During my time there, I realized the disparities between my childhood and Brenda’s. Growing up, I had teachers to tell me I was smart, friends to tell me I was kind, and my mom to tell me I was important. Brenda’s teachers have fifty kids per classroom, while mine I had 15. Her siblings all compete for attention from their absent father and working mother, while I had a stay-at-home mom. I witnessed that little affirmations get lost in the shuffle, to nobody’s fault. But, as a response, I wanted to give this family something while still respecting my place as an outsider. It wasn’t my job to change their lives, nor was I even able to. But I wanted to leave them something.

So, every night when Brenda ran up to me, I knelt and said in Rutooro, “You are kind. You are smart. You are important,” and I made her respond out loud, “Ndi munto murungi. Ndi munto mugezi. Ndi munto womugaso.”  I am kind. I am smart. I am important. It became a pattern, and Brenda repeated back that she was kind, smart, and important, every night.

On my final day, sitting in their home for the last time, I looked up at Rose. She had accepted me into her family, a family that made me feel more loved than I thought possible. Giving them a farewell hug, I knelt for the final time next to Brenda and repeated what I had said for the last two months, “You are kind. You are smart. You are important.” When all the children responded back rather than just Brenda, I knew I could leave. I had found the thread that knit us together and was seeing it in front of my eyes as these children chanted back that they were kind, smart, and so incredibly important. Thus, leaving this family with the feeling that they are valued and loved exactly as they are, something that took me years to learn, made it a little less heart-breaking to walk away and return home. 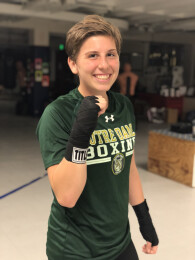 Ms. Marisa Perino is a Junior at the University of Notre Dame. She traveled to Uganda over the summer to teach in one of the villages there. Marisa is President of the Notre Dame Women’s Boxing Team.