Celebrating a Saint: Holiness at Home in Humanity

Celebrating a Saint: Holiness at Home in Humanity 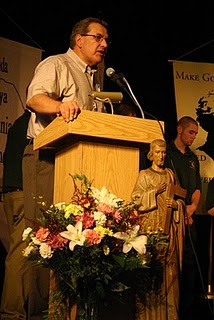 In our continuing series of personal reflections on Brother André leading up to his canonization in Rome on October 17, today we here from the Vicar General of the Congregation of Holy Cross, Brother Thomas A. Dziekan, C.S.C. He shares how Brother André drew him into his vocation as a brother in Holy Cross.

When I was about 5 years old, my mother and some of her friends went on a bus trip sponsored by our parish in Connecticut to the shrines of Quebec. One of the things that I remember vividly is the story my mother told us about Brother André, his devotion to St. Joseph and all that he did during his long life. She had brought back some St. Joseph's Oil to use when we were sick, some medals and a small book called Brother André: The Miracle Man of Montreal. I remember looking at the book with a picture of Brother André on the cover and was for some reason just fascinated by it. I even tried my hand at reading it, but it was a bit more than I could handle at that age.

Almost ten years later, as I entered high school, I was introduced to the Brothers of Holy Cross as my teachers. I didn't make the connection right away between Brother André who had impressed my young mind and these men whom I saw every day. It was during one of my religion classes that I learned that Brother André was a Brother of Holy Cross. At that time, the Spirit was stirring up within my own heart the desire to follow Jesus as a brother. In hindsight – and this is always how God's loving Providence is recognized – that small book, a small bottle of oil, some medals and the example and joy of my teachers were the first beckonings of the Spirit to become a Brother of Holy Cross.

In a very real sense, Brother André drew me to Holy Cross. He is my brother. For me, he embodies this special vocation within the heart of the Church: to love God profoundly, to serve with all one's heart, to welcome, to counsel, to pray, to accompany, to be in relationship as brother – "to be with." He relied on St. Joseph, the first teacher of Jesus, as his guide. 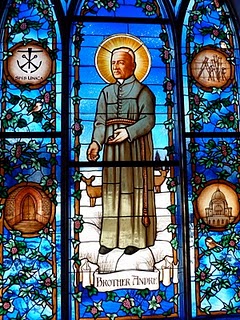 He was a simple man. Being orphaned at an early age, of frail health himself, and not having the benefits of an education did not deter him from going out into the world to help his family. He was an ordinary man, small of stature, who could be curt at times, but who, through his humanity, sought wholeness or completeness in God. His simplicity – which was really a total openness to God – allowed him to approach the world with eyes that could see the hand of a loving and provident God. There was beauty in that simplicity. He loved God and eventually found his way to Holy Cross where he brought the gifts of his great simplicity, his single-hearted intimacy with God, his trusting dependence upon God and his willing surrender to God.
He is a saint. The Jesuit James Martin recently wrote that "Holiness always makes its home in humanity." To be a saint, one has to be fully human. The intimacy of his relationship with God made him dependent upon and attentive to God's will. He meditated on the Passion, he sought to understand and appreciate the great sufferings of Jesus, and perhaps, through his own ministry, sought to alleviate those sufferings in all the women, men and children who came to him to be anointed and prayed over. He looked at them with the compassion of Jesus, loved them and consoled them in their sufferings. He was himself touched by God's love and responsive to God's grace, in his simple, human way. I want to be like that! Who wouldn't?